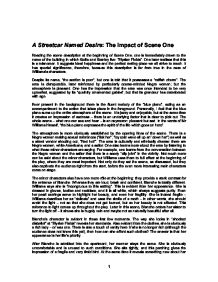 A Streetcar Named Desire: The Impact of Scene One

A Streetcar Named Desire: The Impact of Scene One Reading the scene description at the beginning of Scene One, one is immediately drawn to the name of the building in which Stella and Stanley live: "Elysian Fields". One later realises that this is a misnomer. It suggests ideal happiness and the perfect resting-place we all strive to reach. It has special significance, therefore, because this description is far from true in the case of Williams's characters. Despite its name, "the section is poor", but one is told that it possesses a "raffish charm". The area is disreputable, later reinforced by particularly coarse-minded n***o women; but the atmosphere is pleasant. One has the impression that the area was once intended to be very upmarket, suggested by its "quaintly ornamented gables", but that its grandeur has deteriorated with age. Ever present in the background there is the fluent melody of the "blue piano", acting as an accompaniment to the action that takes place in the foreground. Personally, I feel that the blue piano sums up the entire atmosphere of the scene. It is jazzy and enjoyable, but at the same time it creates an impression of sadness - there is an underlying factor that is clear to pick out. ...read more.

This obviously hides her problem from others, but it also reminds the audience that she has not forgotten her snobbish values altogether. Blanche has many more bad points. Her vanity is further indicated by her constant need to bathe. The references to water are frequent. But her worst attributes are the ways in which she communicates with other people, most notably in the first scene, her sister. As mentioned before, Blanche likes to be in control: she exerts her authority over her sister by giving her orders - "And turn that over-light off!". She is also constantly seeking praise from Stella. This could be because she needs to feel better than Stella does in order to have a relationship with her. It is also because she is very vain - she knows that she is beautiful. Blanche is also quite nasty at times. A classic line of hers is, "I meant to be nice about it..." - she reveals her falseness here. Instead of being genuine and honest, she had intended to lie to her sister. And the fact that she tells this to Stella means that she is very tactless and ignorant of other people's feelings. Another classic quotation is this one: "Where were you? ...read more.

We are even told that it has white columns! More is learned about Belle Reve later when Blanche is being very dramatic to Stella, blaming her for everything that has gone wrong. Yet more exposition is used at the very end of the scene, when we learn that Blanche was married once and that the boy died. This is obviously important for the rest of the play - it is purposefully there to end the scene and stay in the minds of the audience members. Finally, there is one thing I have not yet mentioned, because I believe it to be the most important part of the scene, and perhaps part of one of the general themes of the play. This important part is the directions given to Blanche to get to Stella's apartment. She must take a streetcar named Desire and transfer to one called Cemeteries, where she will be taken to Elysian Fields. As well as being the obvious source for the title of the play, this signifies a natural progression in life in general. Desire, to death, to the Elysian Fields, or Heaven. At the moment I am not able to comment much on its meaning, but it is definitely very important. 3 1 ...read more.