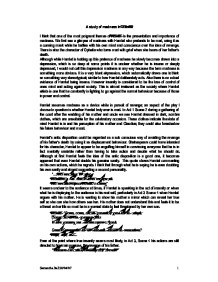 A study of madness in Hamlet.

A study of madness in Hamlet I think that one of the most poignant themes of Hamlet is the presentation and importance of madness. We first see a glimpse of madness with Hamlet who pretends to be mad, using it as a cunning mask while he battles with his own mind and conscience over the idea of revenge. There is also the character of Ophelia who turns mad with grief when she hears of her father's death. Although while Hamlet is holding up this pretence of madness he slowly becomes drawn into a depression, which is so deep at some points it is unclear whether he is insane or deeply depressed, I would not call this depression madness in any way because the term madness is something more obvious. It is a very blunt expression, which automatically draws one to think so something very stereotypical; similar to how Hamlet deliberately acts. Also there is no actual evidence of Hamlet being insane. However insanity is considered to be the loss of control of ones mind and acting against society. This is almost irrelevant as the society where Hamlet exists is one that he constantly is fighting to go against the normal behaviour because of those in power and control. Hamlet assumes madness as a device while in pursuit of revenge; an aspect of the play I choose to question is whether Hamlet truly ever is mad. ...read more.

It is not a question of whether Hamlet truly is mad, because this we are not able to prove either way without personally questioning Shakespeare, it is more deciphering the act of madness from the deep depression and mental state which could be the cause of his actions later in the play and whether this grief descends into insanity at any point. Hamlet assumed a state of madness in order to complete the task given to him by his father, this mask was able to conceal Hamlet's true clever plan and distracted Claudius from knowing the truth, which is that Hamlet knows about him murdering his father. He tells us at the start of the play in his first soliloquy that he is in such a low state that he would consider killing himself had not god "fixed His canon 'gainst self-slaughter". This deep depression could be caused by his father's recent death and his mother's rapid remarriage. We do not know of Hamlets character before the start of the play so it is assumed his state of mind is caused by these occurrences. Too many of his "wild and whirling words" carry direct meaning for us to believe he's mad for any great length of time. In his 'mad' exchanges with his enemies, Claudius, Polonius and Rosencrantz and Guildenstern, there is far too much method in his madness. ...read more.

The society sees Hamlet's madness as dangerous; it is a way of him expressing himself and this is often confused with rebellion. Hamlet presents an aggressive and dangerous distortion of the world and his mask consumes him where by the end of the play all of the normal society has left Hamlet and it is as though he is in his own society. It is a huge contrast to the insanity of Ophelia who simply spoke about her feelings and had no control over her mind. Although this is also going against the society because women were not meant to speak out. It was not correct for a woman to talk openly and behave how Ophelia was. The society of Elsinore is very controlling and do not see insanity as an illness but as a threat. The king sees Hamlet's madness as "turbulent and dangerous". He suspects that his madness may be a pretence and considers it to be more a depression but views Hamlet as a problem because of what he may say or do, with no control over his mind. So sends him away to England as an effort to control him and have him killed, but we can see through Hamlet's escape Shakespeare uses this to prove at this time he is not mad, he is simply clever. Hamlet has managed to prove his sanity by escaping this fate left for him by his uncle, this shows the state of mind of the prince has improved or was never mad to start with. 1 Samantha Ball20/04/07 ...read more.