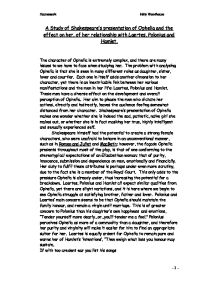 A Study of Shakespeare's presentation of Ophelia and the effect on her, of her relationship with Laertes, Polonius and Hamlet.

A Study of Shakespeare's presentation of Ophelia and the effect on her, of her relationship with Laertes, Polonius and Hamlet. The character of Ophelia is extremely complex, and there are many issues to we have to face when studying her. The problem with analysing Ophelia is that she is seen in many different roles as daughter, sister, lover and courtier. Each one in itself adds another dimension to her character, yet there is an inextricable link between her various manifestations and the men in her life: Laertes, Polonius and Hamlet. These men have a diverse effect on the development and overall perception of Ophelia. Her aim to please the men who dictate her actions, directly and indirectly, leaves the audience feeling somewhat distanced from her character. Shakespeare's presentation of Ophelia makes one wonder whether she is indeed the sad, pathetic, na�ve girl she makes out, or whether she is in fact masking her true, highly intelligent and s******y experienced self. Shakespeare himself had the potential to create a strong female characters, who were unafraid to behave in an unconventional manner, such as in Romeo and Juliet and MacBeth; however, the fa�ade Ophelia presents throughout most of the play, is that of one conforming to the stereotypical expectations of an Elizabethan woman; that of purity, innocence, submission and dependence on men, emotionally and financially. Her duty to fulfil these attributes is perhaps under even more scrutiny, due to the fact she is a member of the Royal Court. This only adds to the pressure Ophelia is already under, thus increasing the potential for a breakdown. ...read more.

It is hard to condemn her as being entirely corrupt without feeling a hint of pity towards her. After all, her lover did murder her father. Through Shakespeare's complex portrayal of Ophelia, the audience is rarely allowed to see her 'true' character due to the fact she is perceived through the eyes of men throughout most of the play. Their different interpretations of her are inextricably linked, and the underlying fact remains; she was conditioned by the men around her. There are often moments in the play where you can't necessarily agree with all of Ophelia's actions, yet we are led to sympathise with her, through her apparent weakness in dealing with such situations. The main question open to debate, is whether or not Ophelia was corrupt. The answer to the enigma of her character is going to depend on whether you take a feminist view or a romantic/tragic view, but ultimately, I feel Ophelia's tragic fall was due to the social conditioning, and the dominance the men exercised over her. However, one may argue that Shakespeare had the ability to create a stronger character, yet he devised Ophelia in such a way that one suspects male dominance infiltrated her from a young age, and therefore is it any surprise Shakespeare ended her life in such a way? It is vital that one looks at the influencing factors and events surrounding Ophelia, before making a final conclusion, especially due to the fact Shakespeare created such a dramatic environment in which the play was set. Whatever your perceptions of Ophelia are, it remains a fact that she is a compelling character, through which Shakespeare highlighted many social issues, as well as creating exceptional drama for all to enjoy. Coursework Holly Woodhouse - 1 - ...read more.