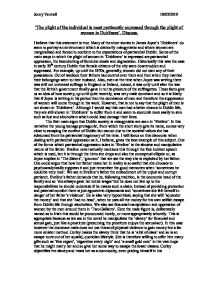 The plight of the individual is most pertinently expressed through the plight of women in Dubliners. Discuss.

'The plight of the individual is most pertinently expressed through the plight of women in Dubliners'. Discuss. I believe that this statement is true. Many of the short stories in James Joyce's 'Dubliners' do seem to portray an environment which is distinctly misogynistic and where women are marginalised and forced to conform to the expectations of patriarchal Dublin. Some of the main ways in which the plight of women in 'Dubliners' is expressed are patriarchal oppression, the besmirching of feminine ideals and degradation. Historically this was the case in early 20th century Dublin that female citizens of the city were downtrodden and suppressed. For example, up until the 1870s, generally, women did not own any of their possessions. Out of wedlock their fathers had control over them and then when they married their belongings went to their husband. Also, even at the time when Joyce was writing there was still not universal suffrage in England or Ireland, indeed, it was only until after the war that the British government finally gave in to the pressure of the suffragettes. These facts give us an idea of how society, up until quite recently, was very male dominant and so it is likely that if Joyce is writing in his period then the dominance of men and therefore the suppression of women will come through in his work. However, that is not to say that the plight of men is not shown in 'Dubliners'. Although I would say that men had a better chance in Dublin life, they are still shown in 'Dubliners' to suffer from it and seem to succumb more easily to sins such as lust and alcoholism which could lead damage their lives. The first main signs that Dublin society is misogynistic are seen in 'Eveline'. In this narrative the young teenage protagonist, from which the short story gets its name, comes very close to escaping the confine of Dublin but cannot due to the societal values she has subsumed from the patriarchal hegemony of the time. ...read more.

Eveline is overcome because she is battling with the forces of societal and religious pressure and hegemonic uniformity which she has subsumed in the 'swaying crowd'. Ultimately this is what paralyses her because she does not have the strength of will to overcome these pressures and chooses to remain in Dublin where she is doomed to repeat the unfulfilling and worthless life of her mother. It is worth noting that the only way Eveline's chance of escape came about was through the help of a man - she did not instigate it herself. As Eveline puts it (she is the 'lucid reflector' at this point): 'Then she would be married - she, Eveline. People would treat her with respect then. She would not be treated as her mother had been' This shows how the only way out of the circle of Weltschmertz for women is marriage and therefore some like the slavey in 'Two Gallants' are willing to go to extreme measures to ensure this escape. However, as we see in 'A Painful Case' marriage can be paralysing, indeed, even Frank with his name and associations with the romantic and exotic may be leading Eveline into a trap. The fact that their destination is Buenos Ayres is slightly ominous as although explicitly it may have connotations with the exotic, 'Going to Buenos Ayres was also slang for taking up a life of prostitution. In 'A Painful Case' Mrs Sinico is trapped in a seemingly unhappy marriage. When she meets Mr Duffy she finally feels that she can express herself and speak freely. Being a captain Mr Sinico was presumably quite dominant in the household and so his wife was forced to keep her views and aspirations to herself. When this way out of her marital paralysis is closed, she cannot bear to return to a life without the passion of their brief relationship and so turns to alcoholism and eventually suicide. ...read more.

After his hopes are dashed he goes back to these pessimistic views and in his epiphany: 'it was useless, useless! He was a prisoner for life'. These words clearly show the feeling of many married men with ambitions in Dublin; they have reached all their initial goals but find that fulfilling their true ambitions is near to impossible. We see the start of this trap in 'The Boarding House' where Mr Doran is caught in a trap laid by Mrs Mooney to ensure that her daughter broke free of the paralysing nature of middle class Dublin life through marriage. However, he is paralysed as he is unable to choose his wife because of the societal values and decencies which he must abide to. We also see the hopelessness of escaping the paralysis of Dublin in 'Two Gallants'. The fact that Lenehan ends up walking in a complete circle mirrors the inescapable circles of the Dante's Inferno in the same way that Little Chandler's views start and end the same in a circle of hope and then destruction on hope similar to that of Steinbeck's 'Of Mice and Men'. The religious high burlesque style which Joyce employs at the end of the short story illustrates how corrupt and deluded their values are. They find almost spiritual joy and excitement in exploiting a woman for financial gain and parasitically living off others. This inescapability from their deranged lives and also the complete immorality of their values ironically contrasts with the title of the short story - these men are the complete opposite to gallants. In conclusion, I believe that although the plight of men contributed to the expression of the plight of the individual in 'Dubliners' the plight of the individual is most pertinently expressed through the plight of women. This is mainly because women have less opportunity to break free of the paralysing mundane life of Dublin, because they are oppressed and abused by the patriarchal hegemony of the time and also because the ideals of women in 'Dubliners' are so besmirched and corrupted. ?? ?? ?? ?? Jonny Venvell 18/02/2010 ...read more.