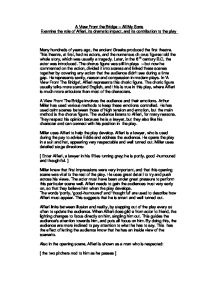 A View From the Bridge - All My Sons - Examine the role of Alfieri, its dramatic impact, and its contribution to the play.

A View From the Bridge - All My Sons Examine the role of Alfieri, its dramatic impact, and its contribution to the play Many hundreds of years ago, the ancient Greeks produced the first theatre. This theatre, at first, had no actors, and the numerous chorus figures told the whole story, which was usually a tragedy. Later, in the 6th century B.C, the actor was introduced. The chorus figure was still in plays - but now he commented on the action, divided it into scenes and linked these scenes together by covering any action that the audience didn't see during a time gap. He represents sanity, reason and compassion in modern plays. In 'A View From The Bridge', Alfieri represents this choric figure. The choric figure usually talks more standard English, and this is true in this play, where Alfieri is much more articulate than most of the characters. A View From The Bridge involves the audience and their emotions. Arthur Miller has used various methods to keep these emotions controlled. He has used calm scenes between those of high tension and emotion, but the main method is the chorus figure. The audience listens to Alfieri, for many reasons. They respect his opinion because he is a lawyer, but they also like his character and can connect with his position in the play. Miller uses Alfieri to help the play develop. Alfieri is a lawyer, who is used during the pay to advise Eddie and address the audience. ...read more.

Miller needed to make Alfieri appear to always be right for the benefit of the audience. If Alfieri had said something contradictory to the audience's beliefs, then the audience would have almost certainly begun to question what he had been telling them. In the same conversation with Eddie, Alfieri shows his professionalism and collectiveness: Eddie: "Listen...will you listen to me a minute? My father always said you were a smart man. I want you to listen to me." Alfieri: "I'm only a lawyer, Eddie." Alfieri is prepared to listen to Eddie, but refuses to tell him exactly what to do, as direct advice is not encouraged amongst lawyers. Throughout this conversation, Alfieri listens to Eddie without interfering, letting him clear his head. This shows that Alfieri is also understanding and wise, another two positive points about him. Alfieri addresses the audience: "Eddie was a good man" This sentence is very important. Although the audience may not have previously accepted this statement, the fact that Alfieri is saying it sends them into all sorts of self-doubt. The audience would probably believe that Eddie was still a good man, as they have no real reason to believe otherwise. But, after all, Alfieri has no reason to lie, and wouldn't because he is such a great man. The audience respects what Alfieri says. He comments on the action in a previous scene and gives hints as to the action in the next, "He works on the piers when there was work", "After they had eaten, the cousins came." ...read more.

Alfieri tells Marco not to hurt Eddie, which suggests that Alfieri feels sorry for Eddie. He appears to understand that Eddie doesn't know what is happening, although is finding it hard to get the message through to him without hurting him too much. "I think that I will love him more than all my sensible client" Alfieri implies that Eddie did have his faults, but he was still a good man. I feel that Alfieri felt pity for Eddie and his situation. Here we begin to understand why the play is classified as a tragedy, because despite the fact that Eddie has a serious problem, the audience still love him for his honesty anyway. They know that he has a good heart, and did not wish this s****l-love for his niece upon himself. The 'narrator' ameliorates throughout the play. By the end of this tragedy the audience have begun to know Alfieri well. As their gradual respect for him grew he became more involved and more important to the storyline. After Eddie's death, Alfieri is lit up so that the audience focus on him yet again. This effect makes the audience feel at one with Alfieri, singling him out, taking him out of the play. He gives a final soliloquy, which calms the audience down after another scene of high tension. This is like an acclamation, as it looks back over Eddie's life. A eulogy is usually a series of memories from a person's life, rather like the play is a series of flashbacks. In the end, the conclusion is inevitable, and ends in tragedy. ...read more.