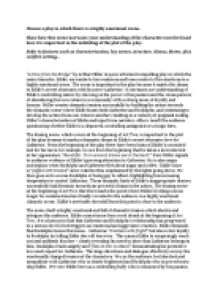 A View from the Bridge by Arthur Miller is a powerful and compelling play in which the main character, Eddie, succumbs to his weakness and loses control of his emotions

﻿Choose a play in which there is a highly emotional scene. Show how this scene increases your understanding of the characters involved and how it is important in the unfolding of the plot of the play. Refer to features such as characterisation, key scenes, structure, climax, theme, plot, conflict, setting... ?A View from the Bridge? by Arthur Miller is a powerful and compelling play in which the main character, Eddie, succumbs to his weakness and loses control of his emotions in a highly emotional scene. The scene is important in the play because it marks the climax to Eddie?s secret obsession with his niece Catherine. It increases our understanding of Eddie?s controlling nature by showing us the power of his passion and the consequences of abandoning his own values in a community with a strong sense of loyalty and honour. Miller creates dramatic tension successfully by building the action towards the climactic scene where Eddie kisses both Catherine and Rodolpho, and continuing to develop the action from one crisis to another resulting in a violent yet poignant ending. ...read more.

This causes Eddie to surprisingly reach out and suddenly kiss her ? clearly revealing his need to show that Catherine belongs to him. Rodolpho reacts angrily and ?flies at him in attack? demonstrating his protective love and respect for Catherine. The stage directions and dialogue effectively convey the emotionally charged tension of the characters. We, as the audience, feel shocked and sympathise with Catherine who is clearly frightened and Rodolpho who is powerless to stop Eddie. We view Eddie here as a controlling bully who is consumed by his passion. As the scene progresses the dramatic tension builds to a shocking climax as Eddie astonishes the audience even more by kissing Rodolpho too. Eddie seems to do this in an attempt to maintain his dominance and power as he ?pins his arms, laughing?. This demonstrated that Eddie needs to be in control and humiliate his rival Rodolpho. However, Catherine is extremely upset and ?tears at Eddie?s face? whilst Eddie ?laughs mockingly at Rodolpho?. These stage directions create a dramatic tension for the audience through the emotionally charged and desperate actions by the characters in this scene . ...read more.

However, Alfieri comments that he somehow admired Eddie for allowing himself to be ?wholly known? suggesting a degree of sympathy for Eddie. Eddie?s feelings were brought to forefront and he suffered the ultimate tragic consequence ? for this Alfieiri seems to hold some respect. Miller perhaps wished us to consider Eddie?s internal conflict and question the extent by which we are controlled by our emotions. Therefore, the kissing scene in Act Two of Arthur Miller?s ?A View from the Bridge? is a highly emotional scene which triggers the revelation of a dark secret conflict in Eddie Carbone?s character which inevitably leads to his tragic end. Prior to this scene we are given clues about Eddie?s feelings which lead to the crisis which forces Eddie on a catastrophic course of action . Miller effectively created this dramatic tension through his skilful use of characterisation, stage direction and plot. Arthur Miller created an intriguing and powerful play which warns against, yet also sympathises with a character who acts on his darkest desires, as Eddie Carbone did in this memorable scene. ...read more.