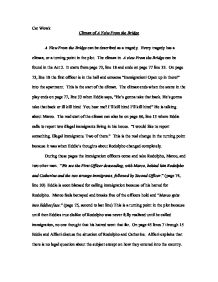 A View From the Bridge Climax

Cat Wowk Climax of A Veiw From the Bridge A View From the Bridge can be described as a tragedy. Every tragedy has a climax, or a turning point in the plot. The climax in A view From the Bridge can be found in the Act 2. It starts from page 73, line 18 and ends on page 77 line 33. On page 73, line 18 the first officer is in the hall and screams "Immigration! Open up in there!" into the apartment. This is the start of the climax. The climax ends when the scene in the play ends on page 77, line 33 when Eddie says, "He's gonna take that back. He's gonna take that back or ill kill him! You hear me? I'll kill him! I'll kill him!" ...read more.

On page 45 lines 7 through 15 Eddie and Alfieri discuss the situation of Rodolpho and Catherine. Alfieri explains that there is no legal question about the subject except on how they entered into the country. On line 15 Eddie assures Alfieri he would never do anything about that. "Oh, Jesus, no, I wouldn't do nothin' about that." Also, before Marco has spit into Eddie's face, Eddie and Marco had always gotten along and never had any problems. Eddie calling immigration changed the relationship between him and Marco which, further into the book, changed the plot tremendously. Between pages 45 and 66, something happened to change the way Eddie feels about Rodolpho that deepened Eddies dislike for him. On page 62 Eddie comes home to Catherine and Rodolpho alone in an empty apartment. ...read more.

Eddie hoped to not have to call immigration, which is why he went to Alfieri for advice before he called. His hope was that there was some other way to get Rodolpho taken away, but after discussing with Alfieri, Eddie found that there was nothing illegal that Rodolpho was doing except for what Alfieri and Eddie had discussed earlier on page 45. Eddie calling immigration lead to a change in the relationship between Marco and Eddie. On page 77, Marco accused Eddie of calling immigration and blamed him for Marco now not being able to provide for his children. "That one! He killed my children! That one stole the food from my children!" (page 77, line 13) Because of the changed relationship between Marco and Eddie, further into the story Marco's hatred for Eddie shows when Marco stabs Eddie and Eddie is brought to his death. If it had not been for Eddie calling immigration, which was the climax of the story, Eddies death would never have occurred. ...read more.