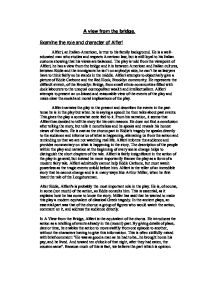 A view from the bridge - Examine the role and character of Alfieri.

A view from the bridge. Examine the role and character of Alfieri Alfieri, an Italian-American, is true to his family background. He is a well-educated man who studies and respects American law, but is still loyal to his Italian customs showing that his views are balanced. The play is told from the viewpoint of Alfieri, he has a view from the bridge and it is between American and Italian cultures, between Eddie and the immigrants he isn't on anybodys side, he can't be as lawyers have to think fairly so he stands in the middle. Alfieri attempts to objectively give a picture of Eddie Carbone and the Red Hook, Brooklyn community. He represents the difficult stretch, of the Brooklyn Bridge, from small ethnic communities filled with dock labourers to the unequal cosmopolitan wealth and intellectualism. Alfieri attempts to present an un-biased and reasonable view of the events of the play and make clear the social and moral implications of the play. Alfieri narrates the play in the present and describes the events in the past tense he is in the play but when he is saying a speech he then talks about past events. ...read more.

But in the next interlude, Alfieri tells us how he is so disturbed, that he consults a wise old woman, who tells him to pray for Eddie. You should consider what Alfieri says in each of the interludes, and you must be able to find them quickly. In the brief scenes in which Alfieri speaks to Eddie, we gain an insight into his idea of settling for half. He repeatedly tells Eddie that he should not interfere, but let Catherine go, "and bless her", that the only legal question is how the brothers entered the country "But I don't think you want to do anything about that". As Eddie contemplates the betrayal, Alfieri reads his mind and repeatedly warns him: "You won't have a friend in the world...Put it out of your mind". Alfieri as the chorus/narrator need never leave the stage. Stage directions refer not to exits and entrances but to the light going down or coming up on Alfieri at his desk, as we switch from the extended bouts of action (flashbacks to Alfieri) to the interludes which allow him to comment, to move forward in time, and give brief indications of circumstantial detail, such as the source of the whisky Eddie brings home at the start of Act Two. ...read more.

eyes were like tunnels" which proves that Alfieri is trying to portray Eddie as quite a sinister character, that has a very one-sided view on everything. He describes Eddie's eyes as tunnels, which are dark and you never quite know where they may end up. Possibly this scares Alfieri into not wanting to give Eddie advice instead he does somewhat seem against Eddie, he fires questions trying to make Eddie feel uncomfortable and guilty but it does not seem to work, it just rages Eddie more. "what does your wife say?", "What did you do that for Eddie?" and "She actually said she's marrying him?". Although Alfieri tries to be unbiased and gain no opinions he obviously does. He thinks of Eddie as a beast when in fact he is just a man confused with all the emotions he's bottled up about his niece. Alfieri, being half immigrant himself he is more on Rodolfo and Marco's side. But perhaps Alfieri is being torn, he is the bridge being stretched from both sides, on one end is Eddie and his family when on the other is Rodolfo and Marco, Rodolfo and Catherine both want to cross when Eddie wants to break it. ...read more.