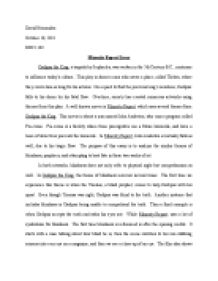 A well-known movie is Minority Report, which uses several themes from Oedipus the King.

﻿David Hernandez October 18, 2012 ENC 1102 Minority Report Essay Oedipus the King, a tragedy by Sophocles, was written in the 5th Century B.C., continues to influence today?s culture. This play is about a man who saves a place, called Thebes, where they crown him as king for his actions. On a quest to find the previous king?s murderer, Oedipus falls to his doom by his fatal flaw. Overtime, society has created numerous artworks using themes from this play. A well-known movie is Minority Report, which uses several themes from Oedipus the King. This movie is about a man named John Anderton, who runs a program called Pre-crime. Pre-crime is a facility where three precognitive see a future homicide, and have a team of detectives prevents the homicide. In Minority Report, John Anderton eventually falls as well, due to his tragic flaw. The purpose of this essay is to analyze the similar themes of blindness, prophecy, and attempting to beat fate in these two works of art. ...read more.

While he is told the second prophecy at the beginning of the play. Here, Tiresias prophesizes that he will become blind, homeless, poor, shunned and weakened with self-loathing. Then in Minority Report, John Anderton receives two prophecies as well. The first one comes from the eyeless drug dealer, saying that the future is a place where the blind live under a one eyed king. Later in the film, Agatha sees a future where John will kill a man named Leo Crowe. Eventually, all four of these prophecies come rue as they were said. This theme is evident as well; this is because prophecy affects them. It makes them do whatever is necessary to make sure it does not happen, and proves their innocence. This is an important theme because it also further develops the plot. Another common theme between these works is trying to defeat fate. Throughout the film or play, the protagonist tries their best to avoid their fate. ...read more.

In the end, Oedipus the King and Minority Report have similar themes. Among the ones listed above they are a few others including hubris. Though not everything is the same, using Classical Greek literature is useful. Greek literature as a reference for a contemporary film can help develop ideas and plot. Knowledge of Greek drama can also better the experience. With this knowledge, someone can better enjoy the film because could understand more of the plot and have background information for movies. However, to much knowledge can ruin a movie experience. If someone knows a lot of Greek drama one can recognize a movie plot, and figure out will happen before getting to enjoy the movie. So, like everything else, knowing Greek drama can better an experience and ruin it at the same time. For Aristotle, this film would meet the criteria of a perfect drama. Due to the futuristic setting, the tragic hero, and complex plot of Minority Report, the movie will certainly meet the criteria of Aristotle. Resources *No outside documents were used for this essay. ...read more.