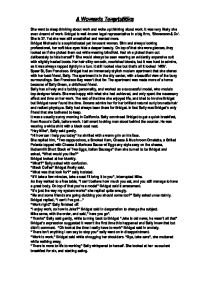 A Woman's Temptations She went to sleep thinking about work and woke up thinking about work. It was very likely she even dreamt of work. Bridget is well-known legal representative in a big firm, 'Stevenson & Co'. She is 27. Yet she was still unsatisfied and wanted more. Bridget Michaels is a sophisticated yet innocent woman. Slim and always looking professional, her soft blue eyes hide a deeper beauty. On top of that she wore glasses, they looked as if she picked them out while wearing blindfold. Had she picked them out deliberately to hide herself? She would always be seen wearing an evidently expensive suit with slightly heeled boots. Her hair silky-smooth, nourished blonde, but it was hard to admire, as it was always rapped tightly in a bun. It still looked nice but that's all it looked 'nice'. Spear St, San Francisco. Bridget had an immensely stylish modern apartment that she shares with her best friend, Sally. The apartment is in the city center, with a beautiful view of the busy surroundings. San Francisco Bay wasn't that far. The apartment was made more of a home because of Sally Green, a childhood friend. Sally has a lively and a bubbly personality, and worked as a successful model, who models top designer labels. She was happy with what she had achieved, and only spent the necessary effect and time on her work. ...read more.

"Are you going to make me ask?" Sally asked. Bridget tried to keep it hidden but she just couldn't. "You wouldn't believe what happened to me yesterday!" she said with a minor rage in her voice and her eyes popped out vaguely. "What?" sally said with curiosity. "I went to the coffee machine at work, and some idiot bumped into me and ruin my suit" Bridget went on with anger. Sally interrupted, "you didn't eat, and had just been drinking coffee?" Sally said in concern. "You're drifting from the point I trying to make." Bridget hesitated. Sally gave I very disappointed look. Bridget came towards her and said "aww I'm really I was working". Them she gave Sally a big huge. Sally wasn't totally convinced, but she was her friend. "Carry on" sally finally replied. Bridget started, "Right, where was I, yes that idiot guy!" 'Woo a guy" said Sally childishly. Bridget gave her such a pessimistic stare and carried on. "After bumping into me. The idiot had the nerve to look endlessly at me for ages. When he decided to come back o life all he did was smile." "What did you do then?" Sally asked. "What could I do, I gave him the eye and stomped off wearing a coffee stained suit," Bridget replied. "Bless him" sally said faintly. "WHAT?" ...read more.

Out of nowhere, "Why are you such a bore for?" Jamie commented. "Huh! What?" Bridget replied with total confusion. Jamie just laughed, which just frustrated Bridget even more. "Go on. What was that you just said?" she demanded. He ignored what she was asking and "stop," he muttered. "What are you going on about now?" Bridget asked. "Our stop!" he replied. As they walked off the bus he muttered, "On top of a bore she's slow too." "I heard that," she said angrily. "Oh well, I wasn't lying" he said while walking it to the firm. "I'm not a bore," she said to herself in desperation to reassure herself. She realized that Jamie had a point. His comments ate at her but not negatively. It was lunch, and Jamie went in to Bridget office where she was working hard. "Let go to eat" he insisted. "I'm working!" she replied bitterly. "So, it's still going to be there when you come back!" he added. As he dragged her to the restaurant that was a bloke away, well it wasn't really dragged, as there was much hesitation from Bridget. As he politely pulled out a seat for Bridget, he sensed that there was a slight change in her. They would squabble time to time, but it was obvious they we having fun. Bridget smiled unnaturally as if it were her first. She'd occasionally look at the time, and because of this she was unable to fully relax. Jamie would stare at her with great hope, as he knew this was only the start. ...read more.