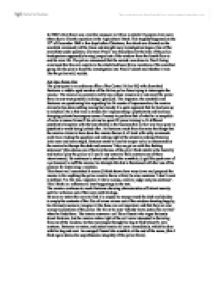 accidental death of an anarchist plot

In 1960's Italy there was a terrible massacre in Milan in which 16 peoples lives were taken due to a b**b explosion in the Agricultural Bank. This tragedy happened on the 12th of December 1969 a few days before Christmas, the attack was blamed on the anarchist community of the times and straight away investigation began. One of the anarchists under question, Giovanni Pinelli was found dead at the base of the police headquarters supposedly having jumped out of the window from the fourth floor to end his own life. The police announced that the suicide was down to Pinelli being convinced that the real culprits to the attack had been fellow members of his anarchist group. So the play is about the investigation into Pinelli's death and whether it was like the police said, suicide. Act One, Scene One The play opens in an ordinary office of the Central Police HQ with dimwitted Bertozzo a middle-aged member of the Italian police force trying to interrogate the maniac. The maniac an eccentric crafty man whose mission is to out smart the police force in any ways possible is doing a good job. The inspector, the constable and Bertozzo are questioning him regarding his 16 counts of impersonation, the maniac claims he has done nothing wrong but already it is quite apparent that he has been up to mischief. ...read more.

This is funny as Pissani who tries to show his power by assaulting Bertozzo in the first scene is put in his place very quickly when faced with the judge. Superintendent enters and shows his anxiety towards the public eye and speaks of how under pressure he feels. The maniac begins to reconstruct the absurd maze of events that supposedly happened revealing (using his own tactics of foolery) to trip up the participants at the occasion of the suicide forcing a different interpretation of what really happened to arise. At one moment which really emphasis's the true stupidity of the force to such an extent I think its one of the most important parts of the whole play, the maniac almost manages to convince them to jump out of the window in an act of suicide themselves. The scene ends in a obsurd rendition of a Italian song. Act Two, Scene One They move on to another version of the supposed accidental death and the maniac challenges every contribution too the story with a overly annalistic crazy interpretation of what the member of staff are saying causing confusion amongst them and things to slip out which hadn't been mentioned before. Each time getting closer to the point to of the maniac, that it wasn't as accidental as the police had the public to believe. ...read more.

The rest of them do not know this but Bertozzo notices the maniacs coat and hat on the stand and it clicks that he is the maniac he shouts but nobody else in the room seems to care and they believe he is still the character he's playing, Bertozzo gets really angry with everyone mocking him so cuffs them all to the window frame. The maniac produces the tape recorder he'd had hidden in his bag the whole time to the rest of the people in room the superintendent orders that Bertozzo should kill the maniac,( this again shows strongly how corrupt the police force was). Bertozzo picks up gun and aims at maniac who suddenly warns him not to bother as he is holding the now live b**b which he says he os going to use the kill them all whilst he escapes. Bertozzo handcuffs himself to the window with his fellow colleagues are maniac give the keys to Feletti and runs off leaving only Feletti now cuffed, she has to make the decision of whether to release them, they all plead and beg persistently until it is too late she runs off leaving them there to die. There is a black out and the maniac who has now joined the crowd says 'Oh dio! Whichever way it goes, you see, you've got to decide. Goodnight. ...read more.