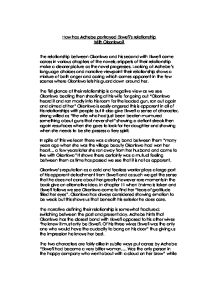 How has Achebe portrayed Ekwefi's relationship With Okonkwo? The relationship between Okonkwo and his second with Ekwefi come across in various chapters of the novels; snippets of their relationship make a clearer picture as the novel progresses. Looking at Achebe's language choices and narrative viewpoint their relationship shows a mixture of both anger and caring which comes apparent in the few scenes where Okonkwo lets his guard down around her. The fist glance at their relationship is a negative view as we see Okonkwo beating then shooting at his wife for going out "Okonkwo heard it and ran madly into his room for the loaded gun, ran out again and aimed at her" Okonkwo is easily angered this is apparent in all of his relationships with people but it also give Ekwefi a sense of character, strong willed as "the wife who had just been beaten murmured something about guns that never shot" showing a defiant streak then again resurfaces when she goes to look for her daughter and showing when she needs to be she possess a fiery spirit. In spite of this we learn there was a strong bond between them "many years ago when she was the village beauty Okonkwo had won her heart... a few years later she ran away from her husband and came to live with Okonkwo" It shows there certainly was a mutual feeling between them as time has passed we see that it is not as apparent. ...read more.

She dotes over and spoils her child, allowing her treats forbidden to other children and building a deep relationship of trust. Ekwefi's history of loss and bitterness renders her a strong woman, capable of withstanding much pain and disappointment. This also leads to a sense of boldness in her, a rather unfeminine characteristic that sometimes annoys Okonkwo. She has the audacity to knock on his door at night and to talk back to him when he accuses her of killing a banana tree. But she also takes her punishment with gritted teeth and without complaint. This kind of strength and boldness has something masculine about it, which emerges even more strongly in her daughter, Ezinma. Though not explicitly stated, we think Ekwefi might be Okonkwo's favorite wife, just like Ezinma is his favorite daughter. Achebe has portrayed the relationship between Okonkwo and second wife, Ekwefi, throughout various chapters in the novel. Achebe uses several language features to emphasise their relationship or lack of it in some cases. Achebe uses narrative viewpoint and choice of language to help demonstrate the contrast of anger with love and affection they share between them. Okonkwo and Ekwefi share a daughter called Ezinma. They don't really share a love as such for each other most of the time because Okonkwo constantly beats his wives for every time they do something wrong. However, I think, in a strange sense, that this might be a way that they show their love for each other, seeing as the wife usually doesn't retaliate. ...read more.

On the other hand I do feel as if Ekwefi is Okonkwo's favourite wife because she has the boldness and courage to stand up to him, although he dislikes it, he can see that she is a strong and fiery character. We are also made to believe that Ezinma is also Okonkwo's favourite daughter. I think after seeing all the downfalls in the relationship, there is something beneath Okonkwo's surface which shows he does care, but he is not known for showing any open emotion: he thought all emotions were a sign of weakness and femininity, especially if they were shown by a man. I think that Okonkwo's reputation as the greatest wrestler in the village has certainly added to the distance between Ekwefi and himself. Whereas normal couples draw closer as the years go by, Achebe shows how Ekwefi and Okonkwo have travelled further and further apart partly due to Okonkwo's beliefs in right and wrong: Wives are supposed to stay at home and look after the children whilst taking care of the cooking and cleaning, and their purpose in life is to serve under their husbands. Achebe has given us an insight into the roles that Okonkwo and Ekwefi play in their relationship as well as an in depth look at them as individual characters. Through various parts in the play, aspects of their relationship can be interpreted in a number of different ways to show their love or their frustration to one another. ...read more.