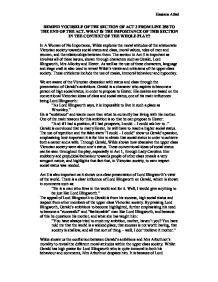 Act 3 : A woman of no importance

REMIND YOURSELF OF THE SECTION OF ACT 3 FROM LINE 358 TO THE END OF THE ACT. WHAT IS THE IMPORTANCE OF THIS SECTION IN THE CONTEXT OF THE WHOLE PLAY? In A Woman of No Importance, Wilde explores the moral attitudes of the aristocratic Victorian society towards social status and class, moral values, roles of men and women, and the relationships between them. The section in Act 3 is important as involves all of these issues, shown through characters such as Gerald, Lord Illingworth, Mrs Allonby and Hester. As well as the use of these characters, language and stage craft is also used to reveal Wilde's views and criticisms of the upper class society. These criticisms include the use of masks, immoral behaviour and hypocrisy. We are aware of the Victorian obsession with status and class through the presentation of Gerald's ambitions. Gerald is a character who aspires to become a person of high social status, in order to propose to Hester. His desires are based on the conventional Victorian ideas of class and social status, one of his main influences being Lord Illingworth: "As Lord Illingworth says, it is impossible to live in such a place as Wrockley." He is "ambitious" and wants more than what he currently has living with his mother. One of the main reasons for this ambition is so that he can propose to Hester: "And if I had a position, if I had prospects, I could - I could ask her to -" Gerald is convinced that to marry Hester, he will have to reach a higher social status. ...read more.

Hester's biblical interpretation emphasises her puritan nature, and Wilde uses this to examine the tradition biblical morality, showing the reader that the conventional values of the world were quite different. Mrs Arbuthnot does not agree with the stigma of illegitimacy placed on the child, and does not want Gerald to suffer as she has, and this is why she has, and continues, to shelter him. Even after having withdrawn from society, Gerald's character contrasts to Mrs Arbuthnot's, as he still has "ambition" and wishes to conquer the world. We can see the use of dramatic irony used in this section of the play. Hester thinks Mrs Arbuthnot is good and pure, but the reader is aware that Mrs Arbuthnot is not as pure as she looks. Wilde makes the reader question whether, if Hester knew, she would judge Mrs Arbuthnot differently. Through the use of subtext, Wilde allows us to question the meaning of purity, and whether it is as simple as Hester thinks. It is in this section of Act 3, that Wilde highlights the double standards between men and women, making it important in context to the whole play. Having told Gerald her story, Mrs Arbuthnot is shocked to her his response: "I dare say the girl was as much to blame as Lord Illingworth was." Wilde uses Gerald to judge Mrs Arbuthnot, saying that the blame should be placed on the woman as well as the man. ...read more.

This, along with phrases such as "horribly insulted", makes the reader realise that is considered as immoral behaviour, which is not accepted even within the upper classes. It also emphasises Lord Illingworth's arrogance. Having said in Act 1 that "there is no woman in the world who would not be a little flattered if one made love to her", he has been proved wrong, as this is not the case with Hester. Wilde uses the kiss to represent the corruption of the upper class society, as the s****l advance shows immoral nature. The stage action dramatises the conflict of values in Gerald's life, by calling into question his loyalty and admiration to Lord Illingworth and his love for Hester. Wilde reveals his revelation at this stage of the play as the audience, due to the heightened tension, knows it has to come out - this is another part of the play in which dramatic irony comes into effect. From the end of Act 3, the reader is told the revelations that they were expecting, and through this, Wilde gives us an insight to the main issues raised throughout the play. We can see the double standards of men and women, which Wilde makes us question through Gerald, Mrs Arbuthnot and Hester and Gerald's character also highlights the obsession and importance of social status at the time. This part of the play is also important as we can see the use of Wilde's main techniques, such as dramatic irony and the use of subtext and stagecraft to reveal hidden meanings. ?? ?? ?? ?? Hassana Afzal ...read more.