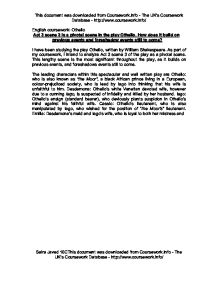 Act 3 scene 3 is a pivotal scene in the play Othello. How does it build on previous events and foreshadow events still to come?

Act 3 scene 3 is a pivotal scene in the play Othello. How does it build on previous events and foreshadow events still to come? I have been studying the play Othello, written by William Shakespeare. As part of my coursework, I intend to analyze Act 3 scene 3 of the play as a pivotal scene. This lengthy scene is the most significant throughout the play, as it builds on previous events, and foreshadows events still to come. The leading characters within this spectacular and well written play are Othello: who is also known as "the Moor", a black African prince living in a European, colour-prejudiced society, who is lead by Iago into thinking that his wife is unfaithful to him. Desdemona: Othello's white Venetian devoted wife, however due to a cunning Iago, is suspected of infidelity and killed by her husband. Iago: Othello's ensign (standard bearer), who deviously plants suspicion in Othello's mind against his faithful wife. Cassio: Othello's lieutenant, who is also manipulated by Iago, who wished for the position of "the Moor's" lieutenant. Emilia: Desdemona's maid and Iago's wife, who is loyal to both her mistress and husband, however she is also killed due to her loyalty to her husband. Roderigo: A Venetian, who is also in love with Desdemona, but is systematically cheated by Iago, and Brabantio: Desdemona's father, who is outraged when he hears of his daughter's marriage to a black man. We first come across Act 3 scene 3 building on previous events when Desdemona reconciles Cassio and assures him that she will do everything she can to make her husband reinstate him to his former position as Othello's lieutenant. "Be thou assur'd, good Cassio, I will do all my abilities in thy behalf." This is the irony in her character that her sense of goodness will eventually be the cause of her death, as Othello starts to suspect her. ...read more.

Emilia was seen to be loyal throughout the whole play, to both her husband and mistress. This loyalty to her husband was the main cause of her death in the final act, as she gave the ultimate proof of Desdemona's innocence to her husband, in desperation of his approval, and as he had requested for it, which shows that she was being loyal to her husband as she did exactly as he required. This one mistake, which was done unknowingly also led to her mistress' death, as it was this one piece of evidence which could have saved her from her brutal death. The hatred we see towards Cassio in Act 3 scene 3 foreshadows Othello's loss in friends, as cassio was a close friend of many others, therefore when Iago's real character is unveiled in the final act, everyone takes Othello to be a very low person as he was manipulated by Iago, into thinking that his wife, who was in actual fact innocent, was being unfaithful to him. Roderigo who was also close to Othello was killed due to Iago. Desdemona's murder was also caused due to the hatred towards Cassio, and this lead to the dismissal of his position, as everyone felt that Othello was not worthy of carrying out his job with respect. Othello's friends, his wife and his reputation were his life, which he lost due to his insecurities, and manipulation by the deceitful Iago. In conclusion the fact that so much significant and crucial parts take place in Act 3 scene 3 proves that it is very important to the rest of the play, as it really starts to develop the plot and themes we have seen growing throughout earlier scenes. This is the scene when we see Iago has successfully manipulated Othello into believing that Desdemona has not been faithful to him, this is very significant to the rest of the play as it affects everything Othello feels and says from this point onwards. ...read more.