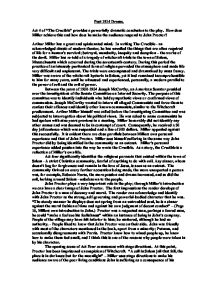 Act 4 of The Crucible provides a powerfully dramatic conclusion to the play. How does Miller achieve this and how does he make the audience respond to John Proctor?

Post 1914 Drama. Act 4 of "The Crucible" provides a powerfully dramatic conclusion to the play. How does Miller achieve this and how does he make the audience respond to John Proctor? Arthur Miller has a great and opinionated mind. In writing The Crucible - an acknowledged classic of modern theater, he has unveiled the things that are often required of life for a human's survival; betrayal, mendacity, inequity and deception - the works of the devil. Miller has re-told of a tragedy of witchcraft trials in the town of Salem, Massachusetts which occurred during the seventeenth-century. During this period the practice of an intensely puritanical form of religion pervaded the atmosphere and made life very difficult and unpleasant. The trials were encompassed and dramatized by mass frenzy. Miller was aware of the witchcraft hysteria in Salem, yet it had remained incomprehensible to him for many years, until he witnessed and experienced, personally, a modern parallel to the power of evil and the evil of power. Between the years of 1950-1954 Joseph McCarthy, an American Senator presided over the investigations of the Senate Committee on Internal Security. The purpose of this committee was to identify individuals who held sympathetic views or confirmed views of communism. Joseph McCarthy wanted to intern all alleged Communists and force them to confess their offences and identify other known communists, similar to the Witchcraft predicament. ...read more.

The audience senses this during the early scenes of the book, Miller creates this effect by the dialogue Elizabeth and John share, allowing the readers to feel and be aware of the anxiety, and unease between the two. (Page 41) "You were alone with Abigail?" She still has her suspicions and has "suddenly lost faith in him" as he replies "Aye, for a moment" The dialogue displays that John and Elizabeth must have been more intimate as man and wife before the affair because even 6 months later, it still has such a powerful effect on their marriage. It has shaped a wedge between the two. John is genuinely sorrowful and regretful, yet he can't find it in his own heart to forgive himself, due to "the magistrate in his heart" as Elizabeth refers to it as. This is part of John's nature, but when his wife, whom he loves dearly, does not show warmth towards him, he is not encouraged to show self forgiveness, or to feel at one with himself - "Spare me! You forget nothin' and forgive nothin' I have not moved from there to there without I think to please you and still an everlasting funeral marches round your heart!" He wants to share the intimacy they once had, he will do anything to please Elizabeth, by doing so, and he is tending to his guilty conscience. ...read more.

Elizabeth is pleaded with by Parris and Hale; they recognize that Proctor is telling the truth, which causes frustration to the audience, because they both have no power of Proctors fate now. The actions and expressions of Elizabeth and Hale in particular, heighten the drama and emotion of John's death. - "(supporting herself against collapse, with a loud cry) He have his goodness now, God forbid I take it from him" Hale drops to his knees and begins to pray frantically in desperation. Proctor sacrifices his own life for his devotion and loyalty to God. The Crucible shows how innocence can be portrayed and progress into evil. Miller successfully entertains the audience through his use of emotive language and dialogue, stage directions and providing his audience with detailed images and thoughts of characters, providing us with the vision of the reality of the story. The story and the way it was written has similarities to that of William Golding's Lord of the Flies. - Innocence of a group of young children and the evil that evolves from their innocence; horror, murder, lies and bitterness. Arthur Miller provides his audience with a powerful and dramatic ending, and provokes a response of passion and intensity towards the character of John Proctor. Through his elaborate and clever techniques of dialogue between characters, stage directions and his personal experience, Arthur Miller has added passion into his re-telling of the witchcraft trials in Salem. ...read more.