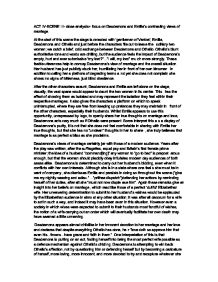 ACT IV-SCENE III- close analysis+ focus on Desdemona and Emilia's contrasting views of marriage. At the start of this scene the stage is crowded with 'gentlemen of Venice', Emilia, Desdemona and Othello and just before the characters file out to leave the solitary two women; we catch a brief, cold exchange between Desdemona and Othello. Othello's blunt authoritative tone and words are chilling, but the audience feels the impact of Desdemona's empty, hurt and ever submissive "my lord?"..."I will, my lord" much more strongly. These feeble utterances help to convey Desdemona's view of marriage and the overall situation. Her husband has just publicly stuck her, humiliating her in front of her own kinsmen in addition to calling her a plethora of degrading terms and yet she does not complain she shows no signs of bitterness, just blind obedience. After the other characters exeunt, Desdemona and Emilia are left alone on the stage, visually, the vast space would appear to daunt the two women in its centre. This has the effect of showing them as isolated and may represent the isolation they feel within their respective marriages. It also gives the characters a platform on which to speak uninterrupted, where they are free from keeping up pretences they may maintain in front of the other characters, especially their husbands. ...read more.

The stark contrast between the two women's comprehension of marriage is also visible in their brief discussion of Lodovico. Desdemona's flattery of Lodovico is strictly noble in its terms, she calls him "a proper man"; perhaps reflecting a subconscious wish that she had married a venetian over Othello, although in light of the her earlier declarations of unfettered love this is unlikely; and then when Emilia calls him "very handsome", Desdemona refers to him again very civilly, noting that "he speaks well". It is important to note the differences in the manner in which the two women speak of Lodovico, Desdemona is very careful of her word choice and this shows her worries that even if she mentally praised another man in a romantic or admiring way she would be betraying Othello, and being as pure and innocent as she inherently is, she could never do that. Emilia however is much more relaxed in her praise, not only is he "very handsome" but Emilia knows of a "lady in Venice would have walked bare foot to Palestine" just to kiss him. This shows that Emilia is less bound by self inflicted morals and for her, the bonds and duties of marriage are wound less tightly, she is not scared to compliment other men. ...read more.

Emilia goes on to highlight how unfair the maltreatment of women by their husbands is, by reminding the audience (and Desdemona) that women are just the same as men, they are equal, they have the same senses, emotions and desires as men do, forcing the audience to question what the difference between the two sexes actually is, and whether it is truly significant enough a difference to allow one s*x to be so abused by the other. The speech is reminiscent of Shylock's famous "I am a Jew" speech and shows not the differences between people but the similarities, that we are all inherently human and the same. Emilia feels so strongly on this because of her own uneven relationship with Iago, whom the audience is certain does not treat her with the respect she deserves, and may have committed the sins against Emilia that Emilia lists, (adultery, peevish jealousies etc). Emilia's speech would have been truly ground breaking in an Elizabethan theatre, and its words still resonate with feminists today. The speech shows above all else in this scene the conflicting views of the two leading women in the play, and after the speech Desdemona quietly adds "God me such uses send, not to pick bad from bad, but by bad mend" indicating she has not listened to a word Emilia said. ...read more.