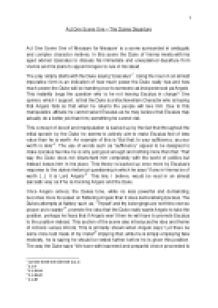 ﻿Act One Scene One ? The Dukes Departure Act One Scene One of ?Measure for Measure? is a scene surrounded in ambiguity and complex character motives. In this scene the Duke of Vienna meets with his aged advisor Esacalus to discuss his immediate and unexplained departure from Vienna and his plans to appoint Angelo to rule in his stead. The play simply starts with the Duke saying ?Esacalus?[1]. Using the noun in an almost imperative form is an indication of how much power the Duke really has and how much power the Duke will be handing over to someone as inexperienced as Angelo. This instantly begs the question why is he not leaving Escalus in charge? One opinion, which I support, is that the Duke is a Machiavellian Character who is hoping that Angelo fails so that when he returns the people will love him. ...read more.

This line, I believe, would be read in an almost sarcastic way as if he is mocking Angelo and the Duke. Once Angelo arrives; the Dukes tone, while no less powerful and demanding, becomes more focussed on flattering Angelo than it does demoralising Escalus. The Dukes attempts at flattery such as, ?Thyself and thy belongings are not thine own so proper as to waste?[4], promote the idea that the Duke really wants Angelo to take the position; perhaps he fears that if Angelo won?t then he will have to promote Escalus to the position instead. This section of the scene also introduces the idea and theme of Actions versus Words. This is primarily shown when Angelo says ?Let there be some more test made of my metal?[5] implying that, while he is simply employing fake modesty, he is saying he should be tested further before he is given this position. ...read more.