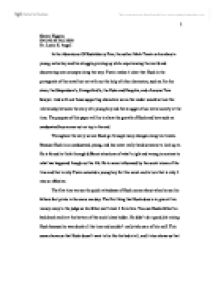 Shawn Higgins EN-232-01 Fall 2003 Dr. Leslie E. Angell In the Adventures Of Huckleberry Finn, the author Mark Twain writes about a young, na�ve boy and his struggle growing up while experiencing the world and discovering new concepts along the way. Twain makes it clear that Huck is the protagonist of the novel but not with out the help of other characters, such as Jim the slave, the Shepardson's, Grangerford's, the Duke and Dauphin, and of course Tom Sawyer. And with out these supporting characters we as the reader would not see the relationship between the story of a young boy and the struggle of our entire society at the time. The purpose of this paper will be to show the growth of Huck and how such an uneducated boy comes out on top in the end. Throughout the story we see Huck go through many changes along his travels. Because Huck is so uneducated, young, and has never really hand someone to look up to. He is forced to think through different situations of what's right and wrong in contrast to what has happened though out his life. ...read more.

This never would have happened if Huck had followed the rules of society at the time. This is a great example of how he contradicts conventional social views. Another scene that was very instrumental in seeing Huck's view differ greatly from the views of society was when Huck starts to feel bad that he is helping Jim escape from his rightful owner. This is about this time the two think they have discovered Cairo. Huck tells Jim that he is going to go to shore and see if they have in fact come across Cairo so he goes and checks it out. Huck comes across some slave hunters when he gets there and they ask him who's on the boat. Huck once again goes with his gut feeling and tells the hunters that his father is on the raft and he has smallpox. The Hunters give Huck some money and tell him to go down river to get some help. This is instrumental because Huck risks him self getting into serious trouble because the hunters could have gone to the boat and tried to help his "father" and seen Jim in person. ...read more.

Well to make the story short, Jim gets out safe but Tom gets shot in the leg during the adventure. Tom is taken back to the Phelps house where Huck goes to see if he is okay. Jim is also taken back to the house in chains because he is a run away slave. But before anything bad happens to Jim Tom informs the Phelps that Jim has been free this whole time, he just wanted to have another adventure with his buddy Huck Finn. The last time we hear from Huck he is headed out west to find what ever he may be looking for. This is far from the young boy that dreamed of robbing and stealing with Tom Sawyer in the start of the novel. This book can be viewed as a great boy hood story or as a view of society threw Mark Twains eyes at the time. I like to choose the ladder, but when it all comes down to it, this story just proves that just because it may be the social norm at the time. It might not be the best thing or the right thing to believe in, and that is what Huckleberry Finn taught me, and that's why he came out on top in the end of the novel. 1 ...read more.