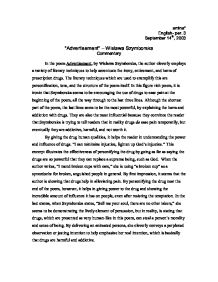 amina* English- per. 3 September 14th, 2003 "Advertisement" - Wislawa Szymborska Commentary In the poem Advertisement, by Wislawa Szymborska, the author cleverly employs a variety of literary techniques to help accentuate the irony, enticement, and harm of prescription drugs. The literary techniques which are used to exemplify this are personification, tone, and the structure of the poem itself. In this figure rich poem, it is ironic that Szymborska seems to be encouraging the use of drugs to ease pain at the beginning of the poem, all the way through to the last three lines. Although the shortest part of the poem, the last lines seem to be the most powerful, by explaining the harm and addiction with drugs. They are also the most influential because they convince the reader that Szymborska is trying to tell readers that in reality drugs do ease pain temporarily, but eventually they are addictive, harmful, and not worth it. ...read more.

She does this by usage of tone. The overall tone in "Advertisement" is a sarcastic, but ironic one. The sardonic tone helps in showing the irony of the author's perspective on drugs, being that they are addictive and powerful. The tone used throughout the poem is more powerful than if the author had used a normal, straight-to-the-point tone, because it makes the reader think of the true nature of the poem. By writing, "All you have to do is take me," by first impression, it seems like quite an easy thing to do, but in reality, Szymborska is trying to show with the ironic tone, that alleviating pain is not that simple, and one must go as far as to give away their sense of morality and principles. Szymborska shows her standpoint on prescription drugs by using a formal tone at the beginning that convinces the readers that the poem is pro-prescription drugs, but the persuasive, serious tone at the end shows the reality of Szymborska's sharp moral thoughts on drugs. ...read more.

The sly diversions, such as the change in tone, the evident structure of the poem, and the engaging of personification help in understanding Szymborska's dark view on not only drugs, but on ethical evils in general. The very lucid and sublimely beguiling message of this poem can only be found after realizing the ironic tone at the start is only a means to convince readers that the usage of drugs to assuage pain is simply not worth it. By comprehending that the author is saying that drugs are the easy way around troubles, when she makes alleviating pain so simple by saying "just gulp me with a glass of water," it can also help in understanding that there have to be drawbacks to everything simple. The drawback that Szymborska is trying to show could be that drugs are eventually addictive and evil. Through understanding personification, the manipulating of tones and the specific structure that the poem takes on, the reader can understand beneath what seems like the inviting surface of drugs and can understand Szymborska's message that drugs are powerful and influential. ...read more.