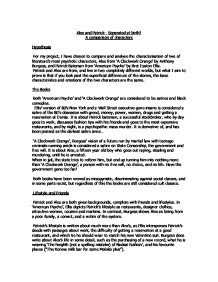 Alex and Patrick - Separated at birth

Alex and Patrick - Separated at birth? A comparison of characters Hypothesis For my project, I have chosen to compare and analyse the characterisation of two of literature's most psychotic characters, Alex from 'A Clockwork Orange' by Anthony Burgess, and Patrick Bateman from 'American Psycho' by Bret Easton Ellis. Patrick and Alex are from, and live in two completely different worlds, but what I aim to prove is that if you look past the superficial differences of the stories, the base characteristics and emotions of the two characters are the same. The Books Both 'American Psycho' and 'A Clockwork Orange' are considered to be satires and black comedies. Ellis' version of 80's New York and a Wall Street executive gone insane is considered a satire of the 80's obsession with greed, money, power, women, drugs and getting a reservation at Dorsia. It is about Patrick bateman, a successful stockbroker, who by day goes to work, discusses fashion tips with his friends and goes to the most expensive restaurants, and by night, is a psychopathic mass murder. It is derivative of, and has been praised as the darkest satire since... 'A Clockwork Orange', Burgess' vision of a future run by martial law with teenage criminals running amok is considered a satire on State Censorship, the government and free will. It is about Alex, a fifteen year old boy who goes out raping, stealing and murdering, until he is arrested. ...read more.

Violence Both books are rife with violence. There is no real reason why either Alex or Patrick have tendencies towards violence, but in both cases they do seem as though they cannot be corrected normally. Both books are also written in the first person, and both Patrick and Alex involve the reader in their horseplay with unforgiving narration. In the extract marked 'violence' Patrick, completely unprovoked, attacks and murders a homeless man and his dog. Notice how Ellis uses 'and' several times in one sentence. I believe this is to make Patrick's actions seem as though as they happened in quick succession. Ellis is also very descriptive. He writes about the homeless man in great detail, describing how he looks, how he smells and how he reacts to Patrick and his actions. Ellis also describes Patrick's actions in great detail. He uses a lot of similes and adjectives, making the description more graphic - "The wound pours out like red, veiny egg yolk", "I slit his nose in two, lightly spraying me and the dog with blood". Alex and Patrick both taunt the homeless men before attacking them. Patrick shows disdain towards the homeless because he doesn't like the thought that people like the bum are taking other peoples money, however, Alex does not do it for any particular reason. Although Burgess does not develop it further, I believe the irony of this piece is that Alex is in reality closer class-wise to the homeless man than he is to the upper-class 'Sophistos' he believe he belongs to, so is picking on his own kind, so to speak. ...read more.

Each of these chapters represent a key point in the novel, and Alex's life. The first time is the readers' introduction to Alex, the second is the beginning of Alex's time in prison, the third time is his release from prison, and the final time when he is fully rehabilitated. Every time, this question is being posed to Alex, but in different contexts, but I feel that the question is one directed at Alex about what he will do with his life. Will it be life or death, freedom or incarceration, an honest life or a criminal one? Unusual Grammar Along with unusually long sentences, in one part of the book, Ellis also changes from first person narrative to third person narrative mid sentence. When writing in the first person, it can be difficult not to slip up with tenses, and it seems strange the first time. Then you realise that Patrick is not completely sane, and it's as though Patrick has an out of body experience as he steals a taxi and drives around Manhattan. Another way Ellis extends sentences is by using dashes to break up the words, making the writing more conversational between Patrick and the reader. Burgess uses the same strategy as Ellis to keep the informal approach of the narration, using dashes and the Lancashire 'like' at the end of most sentences. Ellis has also used Italics in his writing, to emphasise certain points only, the emphasis seems to be in the wrong place. I cannot see why he has done this, and this, along with the switching of narration, only add to the madness of they story. ...read more.