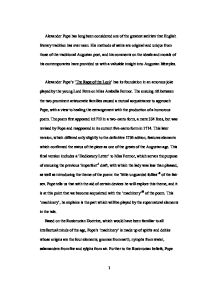 Alexander Pope has long been considered one of the greatest satirists that English literary tradition has ever seen. His methods of satire are original and unique from those of the traditional Augustan poet, and his comments on the ideals and morals of his contemporaries have provided us with a valuable insight into Augustan lifestyles. Alexander Pope's 'The Rape of the Lock' has its foundation in an amorous joke played by the young Lord Petre on Miss Arabella Fermor. The ensuing rift between the two prominent aristocratic families caused a mutual acquaintance to approach Pope, with a view to healing the estrangement with the production of a humorous poem. The poem first appeared in1712 in a two-canto form, a mere 334 lines, but was revised by Pope and reappeared in its current five-canto form in 1714. This later version, which differed only slightly to the definitive 1736 edition, features elements which confirmed the status of the piece as one of the greats of the Augustan age. This final version includes a 'Dedicatory Letter' to Miss Fermor, which serves the purpose of excusing the previous 'imperfect'i draft, with which the lady was less than pleased, as well as introducing the theme of the poem: the 'little unguarded follies'ii of the fair sex. Pope tells us that with the aid of certain devices he will explore this theme, and it is at this point that we become acquainted with the 'machinery'iii of the poem. ...read more.

It is interesting that one of the truly outstanding satirical poems of the Augustan age has also been described as the 'generic model'xvi for the Augustan mock epic. As the term suggests, the mock epic genre parodies the classical epic; it is constructed around the same basic formula and employs the same devices and conventions as the epic itself, yet is based around so trivial a subject that it can only be mock-heroic despite its exultant nature. The epic has a strict set of conventions and quite a structured framework which defines it as a genre. It will always be based around a central heroic figure, contain grandiose speeches and have as its background a hugely important event, take Homer's 'Iliad' set against the remarkable backdrop of the Trojan War, for example. Here we begin to realise how Pope's text is, in effect, neo-classical, how it imitates the classical models but deals with much more trivial matters. It is here that we also come to realise how utterly important Pope's inclusion of the sylphs and spirits is to 'The Rape of the Lock' in terms of its genre. One of the most striking features of the classical epic is the connection between the mortal world of man and the immortal gods, the use of some form of supernatural machinery, which is precisely what Pope has done in 'The Rape of the Lock'. ...read more.