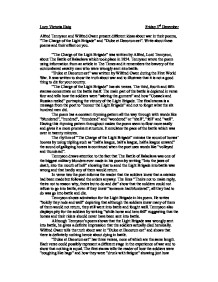 Alfred Tennyson and Wilfred Owen present different ideas about war in their poems, &quot;The Charge of the Light Brigade&quot; and &quot;Dulce et Decorum est&quot;. Write about these poems and their effect on you.

Lucy Victoria Haig Friday 3rd December Alfred Tennyson and Wilfred Owen present different ideas about war in their poems, "The Charge of the Light Brigade" and "Dulce et Decorum est". Write about these poems and their effect on you. "The Charge of the Light Brigade" was written by Alfred, Lord Tennyson, about The Battle of Balaclava which took place in 1854. Tennyson wrote the poem using information from an article in The Times and it remembers the bravery of the outnumbered cavalry men who were wrongly sent into battle. "Dulce et Decorum est" was written by Wilfred Owen during the First World War. It was written to show the truth about war and to illustrate that it is not a good thing to die for your country. "The Charge of the Light Brigade" has six verses. The third, fourth and fifth stanzas concentrate on the battle itself. The main part of the battle is depicted in verse four and tells how the soldiers were "sabring the gunners" and how "Cossack and Russian reeled" portraying the victory of the Light Brigade. ...read more.

The lines "Theirs not to make reply, theirs not to reason why, theirs but to do and die" show that the soldiers could not refuse to go into battle, even if they knew "someone had blundered", all they had to do was go into battle and die. Tennyson shows admiration for the Light Brigade in his poem. He writes "boldly they rode and well" depicting that although the soldiers knew many of them of them would not return, they still went into battle and fought well. Tennyson also displays pity for the soldiers by writing "while horse and hero fell" suggesting that the horses and their riders should never have been sent into battle. Although Tennyson's poem shows that the Light Brigade was wrongly sent into battle, he gives a definite impression that the soldiers actually died heroically. Wilfred Owen tells the truth about war in "Dulce et Decorum est" and shows that there is definitely nothing heroic about dying in battle. "Dulce et Decorum est" has three verses, none of which are the same length. ...read more.

The final verse finishes with a message, "The old lie: Dulce et decorum est pro patria mori", that to die for your country is not an honour. Owen uses a variety of metaphors and similes to convey his point, examples of this are "obscene as cancer", cancer is a horrible disease which has taken many lives and reflects the violence of war, "coughing like hags", implying they are old and weary and "like a devil's sick of sin", this indicates that they all feel it is wrong to be killing people and are sick of it but there is no way to get out of it. All of these metaphors and similes suggest something bad and again tell the reader how awful war is. There is a constant rhyming pattern throughout, the first line and the third, the second with the fourth and so on. This gives the impression that nothing is equal in war but it is a repetitive experience. I think this poem is more powerful than "The Charge of the Light Brigade" because Alfred, Lord Tennyson was not at the Battle of Balaclava but Wilfred Owen saw all the horrors of the First World War and was able to give a correct image of what actually happened in battle. ...read more.

*** 3 STARS
This is a good essay which acknowledges the differences in social and historical contexts of two different wars and discusses the main difference between the two poems, ie. one is written by a poet who experienced first hand the horrors of war and the other is an imaginary scenario based on a newspaper report. Although brief this essay generally uses well selected quotes to support statements and discusses the structure of the poems and the poets' intentions.