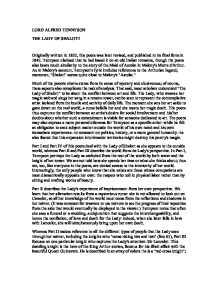 LORD ALFRED TENNYSON THE LADY OF SHALOTT Originally written in 1832, this poem was later revised, and published in its final form in 1842. Tennyson claimed that he had based it on an old Italian romance, though the poem also bears much similarity to the story of the Maid of Astolat in Malory's Morte d'Arthur. As in Malory's account, Tennyson's lyric includes references to the Arthurian legend; moreover, "Shalott" seems quite close to Malory's "Astolat." Much of the poem's charm stems from its sense of mystery and elusiveness; of course, these aspects also complicate the task of analysis. That said, most scholars understand "The Lady of Shalott" to be about the conflict between art and life. The Lady, who weaves her magic web and sings her song in a remote tower, can be seen to represent the contemplative artist isolated from the bustle and activity of daily life. The moment she sets her art aside to gaze down on the real world, a curse befalls her and she meets her tragic death. ...read more.

Interestingly, the only people who know that she exists are those whose occupations are most diametrically opposite her own: the reapers who toil in physical labor rather than by sitting and crafting works of beauty. Part II describes the Lady's experience of imprisonment from her own perspective. We learn that her alienation results from a mysterious curse: she is not allowed to look out on Camelot, so all her knowledge of the world must come from the reflections and shadows in her mirror. (It was common for weavers to use mirrors to see the progress of their tapestries from the side that would eventually be displayed to the viewer.) Tennyson notes that often she sees a funeral or a wedding, a disjunction that suggests the interchangeability, and hence the conflation, of love and death for the Lady: indeed, when she later falls in love with Lancelot, she will simultaneously bring upon her own death. Whereas Part II makes reference to all the different types of people that the Lady sees through her mirror, including the knights who "come riding two and two" (line 61), Part III focuses on one particular knight who captures the Lady's attention: Sir Lancelot. ...read more.

In Part IV, all the lush color of the previous section gives way to "pale yellow" and "darkened" eyes, and the brilliance of the sunlight is replaced by a "low sky raining." The moment the Lady sets her art aside to look upon Lancelot, she is seized with death. The end of her artistic isolation thus leads to the end of creativity: "Out flew her web and floated wide" (line 114). She also loses her mirror, which had been her only access to the outside world: "The mirror cracked from side to side" (line 115). Her turn to the outside world thus leaves her bereft both of her art object and of the instrument of her craft--and of her very life. Yet perhaps the greatest curse of all is that although she surrenders herself to the sight of Lancelot, she dies completely unappreciated by him. The poem ends with the tragic triviality of Lancelot's response to her tremendous passion: all he has to say about her is that "she has a lovely face" (line 169). Having abandoned her artistry, the Lady of Shalott becomes herself an art object; no longer can she offer her creativity, but merely a "dead-pale" beauty (line 157). ...read more.