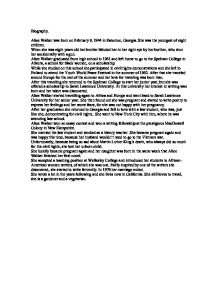 Biography. Alice Walker was born on February 9, 1944 in Eatonton, Georgia. She was the youngest of eight children. When she was eight years old her brother blinded her in her right eye by her borther, who shot her accidentally with a gun. Alice Walker graduated from high school in 1961 and left home to go to the Spelman College in Atlanta, a school for black women, on a scholarship. While she studied on this school she participated in civil rights demonstrations and she left to Finland to attend the Youth World Peace Festival in the summer of 1962. ...read more.

At this university her interest in writing was born and her talent was discovered. Alice Walker started travelling again to Africa and Europe and went back to Sarah Lawrence University for her senior year. She then found out she was pregnant and started to write poetry to express her feelings and her worst fears, for she was not happy with her pregnancy. After her graduation she returned to Georgia and fell in love with a law student, who was, just like she, demonstrating for civil rights.. ...read more.

Unfortunately, because being so sad about Martin Luther King's death, who always did so much for the civil rights, she lost her unborn child. She luckily became pregnant again and her daughter was born in the same week that Alice Walker finished her first novel. She accepted a teaching position at Wellesley College and introduced her students to African- American women writers, of which she was one. Fairly inspired by one of the writers she discovered, she started to write fervently. In 1976 her marriage ended. She wrote a lot in the years following and she lives now in California. She still loves to travel, she is a gardener and a vegetarian. ...read more.