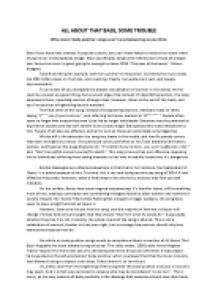 ALL ABOUT THAT BASS, SOME TROUBLE Why recent body positive songs arent as empowering as you think

﻿ALL ABOUT THAT BASS, SOME TROUBLE Why recent ?body positive? songs aren?t as empowering as you think Even if you have little interest in popular culture, you can?t have failed to notice the recent trend of pop music involving body image- More specifically, songs with references to those of a larger size. Some the music is good; going far enough to deem 2014 ?The year of the booty?. Others disagree. Take Nicki Minaj for example, with her summer hit Anaconda. Currently the music video has 300 million views on YouTube, and counting. Clearly, her audience is vast, and deeply impressionable. To an extent (If you disregard the blatant sexualisation of women in the video), the hit could be viewed as a good thing- Some would argue that instead of objectifying women, the song empowers them, especially women of larger sizes. However, listen to the end of the track, and you?ll encounter a frightening double standard. The final verse of the song, instead of empowering women, demeans many of them, saying ?F*** you if you?re skinny?, and referring to thinner women as ?B******?. ...read more.

No article on body positive songs would be complete without a mention of All About That Bass- Arguably the most debated song this year. The sickly sweet, 1950s style hit by Meghan Trainor topped the charts last autumn, attracting extensive discussion wherever it was played. Some gushed at the self-proclaimed ?body positive? artist, overjoyed that that the music industry had allowed a song to express such ideas. Others weren?t so convinced. It?s pretty clear from the beginning of the song that this body positive inclusion is not all it may seem- And is in fact very exclusive to anyone who may be considered ?a size two?. This is ironic, as the very essence of body positivity is the ideology that everyone should love their body. Of course, some fans argue that ?size twos? have the majority of songs today are written about them, but- as is typical of the mainstream music industry- They fail to empower. This exclusive nature of the song is reiterated at the chorus, where women learn that, ?Guys like a little more booty to hold at night?. ...read more.

This is reiterated by Trainor?s responses in press coverage and interviews- She said herself that she does not consider herself a feminist, because she loves people of all genders. Ironically, the statement she has just made feminist in itself, and highlights her lack of understanding of the topic. If someone is truly passionate about body image, you would expect them to have a firm grasp of the issues of feminism too. This is reiterated by her reactions in a recent Guardian interview, where the interviewer mentions how Trainor herself is not a particularly large woman. Instead of the measured, fair response you would expect from a body image enthusiast, she positively gushes over the comment, as if it was the most charming of compliments- Showing that personally, she finds being considered plus size a negative thing. When you consider her song?s lyric, ?Don?t worry about your size?, her reaction is incredibly hypocritical, and only highlights the transparency of the song?s message further- It?s not body positive, it?s just trying to convince people it is to sell records. So the next time you?re about to gush over a new ?body positive? song in the charts, have a read of the lyrics first. And go and listen to some p***y Riot instead. ...read more.