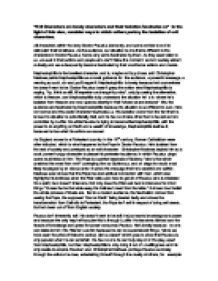 All characters within the story Doctor Faustus are lonely, and some confide to evil to relinquish their loneliness.

"Evil Characters are lonely characters and their isolation fascinates us" In the light of this view, consider ways in which writers portray the isolation of evil characters. All characters within the story Doctor Faustus are lonely, and some confide to evil to relinquish their loneliness. As the audience, our situation is one that is different to the characters in Doctor Faustus, hence why we're fascinated by them. As they seem alien to us, unusual in their actions and people who don't follow the normal trends in society attract curiosity and we subsequently become fascinated by their unorthodox actions and morals. Mephastophilis is the loneliest character, and is, maybe not buy chose, evil. Christopher Marlowe paints Mephastophilis as a moral guidance for the audience, a powerful message, a warning as such, sin and you'll regret it. ...read more.

As England moved to a Protestant country in the 16th century, Roman Catholicism were often ridiculed, which is what happened to the Pope in Doctor Faustus. He's isolated from the rest of society and portrayed as an evil character. Christopher Marlowe depicts him as a cruel, power hungry character to please his protestant audience, in which Faustus plays some cruel tricks on him. The Pope is a perfect example of Gluttony "who's that which snatched the meat from me?" portraying him as Gluttonous, and on stage he would most likely be played by an obese actor, it sends the message that he's wasteful and selfish. Marlowe even shows that the Pope has lost spiritual connection with God, which also highlights his lonliness when the Friar calls upon God to get rid of Faustus who is mistaken for a spirit, God doesn't intervene. ...read more.

He becomes blinded and the facade of knowledge and greed for power consumes Faustus. He's lonely because no one can relate to him. His 'friends' use him because he can do supernatural things, "since we have seen the pride of Nature's works[...]let us depart" which goes to show that Faustus is only popular when he can entertain. He has no one he can truly rely on in the play, apart from Mephastophilis, but then Mephastophilis is only doing it out of unwillingness and his only desire to acquire Faustus' soul. Christopher Marlowe portrays Faustus as lonely through the actions he does, entertaining himself through the cruelty of others, for example when he played the trick on the horse keeper, and the Pope and also his desire to want a wife shows his loneliness as he needs a companion, someone he can trust and love. Things he lacks in reality. ...read more.