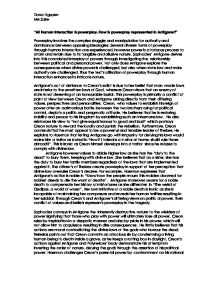 "All human interaction is powerplay. How is powerplay represented in Antigone?" Powerplay involves the complex struggle and manipulation for authority and dominance between opposing ideologies. Several diverse forms of powerplay through human interaction are experienced, however power is a tortuous process to attain and retain due to its tangible and allusive nature. Sophocles' Antigone delves into this convoluted interplay of powers through investigating the relationship between political and personal power. Not only does Antigone explore the consequences when divine power is challenged, but also when state law and male authority are challenged. Thus the text's utilisation of powerplay through human interaction enhances its intricate nature. Antigone's act of defiance to Creon's edict is due to her belief that man-made laws are inferior to the unwritten laws of God, whereas Creon views that an enemy of state is not deserving of an honourable burial. This powerplay is primarily a conflict of point of view between Creon and Antigone arising directly from their differing values, perspectives and personalities. Creon, who values to establish his reign of power after an acrimonious battle between the two brothers vying for political control, depicts a politic and pragmatic attitude. He believes that he is restoring stability and peace to his kingdom by establishing such an inhumane law. ...read more.

Creon's actions against Antigone and Polyneices' body demonstrate his attempts in inverting the order of nature, defying the gods through the assertion of his political power. Haemon challenges Creon's parental power by confrontment on his rational decision of Antigone's fate. He uses metaphoric language in "See how the trees beside a stream in flood sae, if they yield to force, each spray unharmed, but by resisting perish root and branch", to compare Creon's kingly authority to a tree representing how he governs his kingdom. Haemon advises that even though his decisions were for the good of the people, in the end his obstinate and unyielding nature towards Antigone will perish him. Creon's ignorance to these confrontments is symbolic of his blindness to the catastrophic events he was creating, thus losing all power over controlling his fate. Antigone creates powerplay in her confrontation with Creon as she attempts to use her power to prevail over his male and kingly authorities. Her determination and courage derives from her belief that she did not commit a crime. She declares that the laws of the state are not binding as they have been laid down by a man and men are not infallible. Antigone's statement is a direct challenge to male dominance and Creon's political power, showing her critical involvement in the powerplay. ...read more.

To him religious duties are secondary to the supreme sovereignty of the state and to the standard of human and political ethics. It is Creon's pride which deters him from realising his act of foolishness before the chain of tragic events. Irony is evident in Creon's statement, the 'heart, temper and mind of man' are tested by 'authority and rule' and that 'a king whose lips are sealed by fear, unwilling to seek advise' is 'no less damned than he who puts a friend above his country'. It is ironic as Creon acknowledges that it is imprudent to be obstinate and wilful, yet he does not recognise his tyrant characteristics due to his blindness. Creon's fall at the end is ironic as he believed his prosperity were on the augment after his enthronement. However, he eventually concludes that even the most powerful king is powerless in the face of destiny. Powerplay is evident in Antigone as Creon rules with pride and arrogance in a tyrannical fashion, inhibiting him from capitulating ensuing on his detrimental fate. Powerplay is represented in conflicting values, perspective and personalities as they struggle for authority and dominance. In Antigone, it can be seen that powerplay extends to all levels of human interactions through political, parental and male power. Sophocles not only reiterates the powers one person wields over another but also the consequences resulting from a controversy between opposing powers. ?? ?? ?? ?? Dona Nguyen Mrs Sake ...read more.