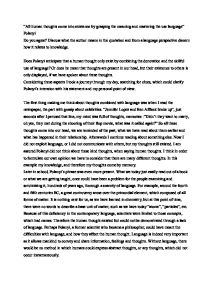 &quot;All human thoughts come into existence by grasping the meaning and mastering the use language&quot; Polanyi - Do you agree? Discuss what the author means in the quotation and from a language perspective discern how it relates to knowledge.

"All human thoughts come into existence by grasping the meaning and mastering the use language" Polanyi Do you agree? Discuss what the author means in the quotation and from a language perspective discern how it relates to knowledge. Does Polanyi anticipate that a human thought only exist by combining the denotation and the skilful use of language? Or does he mean that thoughts are present in our head, but their existence to others is only displayed, if we have spoken about these thoughts. Considering these aspects I took a journey through my day, searching for clues, which could clarify Polanyi�s intension with his statement and my personal point of view. The first thing making me think about thoughts combined with language was when I read the newspaper, the part with gossip about celebrities. "Jennifer Lopez and Ben Affleck broke up", just seconds after I perused that line, my mind was full of thoughts, memories -"Didn't they want to marry, oh yes, they met during the shooting of their flop movie, what was it called again?" So all these thoughts come into our head, we are reminded of the past, what we have read about them earlier and what has happened in their relationship. ...read more.

Because of this deficiency in the contemporary language, scientists were limited to those concepts, which had names. Therefore the human thought existed but could not be demonstrated through a lack of language. Perhaps Polanyi, a former scientist who became a philosopher, could have meant the difficulties with language, and how they affect the human thought. Language is indeed very important as it allows mankind to convey and share information, feelings and thoughts. Without language, there would be no method in which humans could express abstract thoughts, or any thoughts, which did not occur instantaneously. While driving on the school bus, we passed a poster, showing chopsticks holding a whale. It is actually for a national fund for animal welfare, but I didn't have to read it. the mind sees the chopsticks, and immediately thinks of Japan, then food and through the whale the message is delivered. "Japan started to hunt for whales again". It is said to be one of the merits of the human mind that it is capable of framing abstract ideas, and of conducting nonsensational thought. This is supposed to differ the human way of thinking from the mind of animals. ...read more.

Language is very closely connected with language as we get most of our knowledge by using language. It is an integral part of our existence and survival.we depend on it to think and communicate on a day to day basis from person to person.but are our thought processes directly linked to words and symbols we call language. Is it possible that language can alter the way we think or control what we know? Now at the end of the day, I can come to the conclusion, that everybody has his or her own definition of thought, meaning and mastering the use of language, and this might affects whether one agrees with Polanyi or not. I myself do not think that human thoughts only come into existence when grasping the meaning and mastering the use of language. I just have many thoughts, which are kept in my head, without using the language I would define as something used to communicate with others. As I am a human, and I constantly think, I believe that I do have human thoughts, and I know that some of them do come into existence, but they often stay in my head the way they are. Without being transformed into "real" language so others can understand me. ...read more.