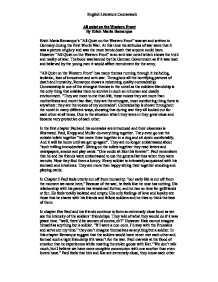 All quiet on the Western FrontBy Erich Maria Remarque

All quiet on the Western Front By Erich Maria Remarque Erich Maria Remarque's "All Quiet on the Western Front" was set and written in Germany during the First World War. At this time the attitudes of war were that it was a picture of glory and was the most heroic death that anyone could have. However "All Quiet on the Western Front" is an anti-war novel which shows the truth and reality of war. The book was banned by the German Government as if it was read and believed by the young men it would affect recruitment for the army. "All Quiet on the Western Front" has many themes running through it including, isolation, loss of innocence and anti-war. Throughout all the horrifying pictures of death and humanity, Remarque shows a redeeming quality comradeship. Comradeship is one of the strongest themes in the novel as the soldiers friendship is the only thing that enables them to survive in such an inhuman and deadly environment. "They are more to me than life, these voices they are more than motherliness and more than fear; they are the strongest, most comforting thing there is anywhere: they are the voices of my comrades". ...read more.

"I find I do not belong here any more, it is a foreign world." He feels separated from the people who don't understand the front. "Was it bad out there Paul?" Paul can't put the experiences of the war front in to words. Nobody would understand what it is like. Without his comrades he is alone he cant talk about such things to anybody else. His encounters with local people and memories of his past only make him miss his comrades, who are now the only people that he can fully trust. When Paul returns from his leave he is given some potato cakes made by his sick mother. He takes the cakes back to the front and shares them with his comrades knowing that his "mother cooked them herself and that she was probably in pain as she stood before the hot stove". Some of the cakes were mouldy so he keeps them for himself and he gives the fresh ones to Kat and Kropp. These cakes are Paul's greatest gift from his mother and it could be the last thing that he receives from her before she dies, but he still shares them with his comrades. ...read more.

When Paul is with his comrades he is no longer alone, his friends give him strength without his fellow comrades he wouldn't be able to survive the war, it is his friends who keep him alive, who keep him fighting each day. Without them he would be nothing, they are what make his life worth. At war they have no one else to turn to and their comrades are the only ones who really know what it is like to be there, because of the situation they are in they grow very close. They always look out for each other and will do anything to protect each other. Remarque, presents comradeship throughout the novel in many different ways. He shows how close the comrades are they way they sit on the toilet together and play cards. He illustrates that they know each other so well that they know what each other are thinking and don't need to talk as their bond is so strong between them. They care for each other and share things which mean so much to them. Their comrades mean every thing to them each other and without each other they are lost, they feel that there is nothing worse than being without their fellow comrades. ?? ?? ?? ?? English Literature Coursework ...read more.