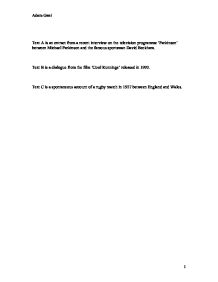 All three transcripts share the common theme of sport. While addressing the issue in very different ways, they ultimately all aim to entertain and inform. The speech ranges from spontaneous to completely scripted and these differences in creation are visi

Text A is an extract from a recent interview on the television programme 'Parkinson' between Michael Parkinson and the famous sportsman David Beckham. Text B is a dialogue from the film 'Cool Runnings' released in 1993. Text C is a spontaneous account of a rugby match in 1927 between England and Wales. Compare and contrast three transcripts based around a common theme. All three transcripts share the common theme of sport. While addressing the issue in very different ways, they ultimately all aim to entertain and inform. The speech ranges from spontaneous to completely scripted and these differences in creation are visible through the varying techniques and characteristics on display. The purpose of the Parkinson interview is to primarily entertain, but also inform and educate the listener of Beckham's views. Beckham was the captain of the England football team, and this global exposure led to him becoming a football superstar. Although he is there to talk about football, he also has a distinguished brand image to portray. These factors would have led to a mixed and vast audience. The questions would have been discussed beforehand, creating the semi-scripted feel, but Parkinson is likely to improvise in parts. Text B is a scripted discussion between two characters, in which Brenner is giving an inspirational talk to Junior. ...read more.

the game'. As the interviewer is entering a sensitive topic for Beckham, his stuttering allows him to voice his uncertainty on how to approach the topic. Text C also shows false starts like " about as (.)about as exciting". This is a characteristic of non scripted pieces, although the stutters in each text are very different in terms of context, both allow time to re-think the way of which something will be said. Parkinson eventually chooses to make the statement "It was awful wasn't it" which adds a tag question for reassurance or agreement. After establishing the informality, this statement is accepted and by using rising and falling intonation, it is portrayed as humorous by the audience; which is shown through laughter. The informal nature of the interview is also shown through paralinguistic features, such as the relaxed posture of both parties, although this can not be portrayed fully in the transcript. Turn taking is prominent in Text A, and Parkinson as the host does not take a passive role, and fully interacts in the conversation through the use of inclusive pronouns such as 'We seem to be'. This contrasts with text B and C, particularly text B where Brenner is talking at Junior rather than with him. ...read more.

Text C reveals practices in spoken language that have evolved over time, the use of players names like "Pearl is taking it". This is now common practice today and has developed from early commentary. In addition, the accent that is heard in Text C is very well spoken with Received Pronunciation. This is a sign of the time period, with 'BBC English' being the only accent commonly heard broadcasted, this is very different to the modern transcripts where regional accents flourish. Text A as a whole has a negative undertone that can be seen by looking at the words stressed during the conversation. "Wasn't", "frustrating", "support", "machine". This can also shown from the syntax order for example, " It's a problem isn't it". This emphasises subject as the problem, and is a leading question. Text C has a much more vibrant feel, and positive approach with shown with phrases such as "Well done", "exciting", "Come on England". All three transcripts have dealt with the issue of sport, and through this common theme, it is clear to see how spoken English has evolved and how different time periods show variation in the language used today. It is evident how the different contextual factors influence the outcome of the speech, with scripted speech offering a contrasting feel to more natural speech found in spontaneous accounts. ?? ?? ?? ?? Adam Gazi 1 ...read more.