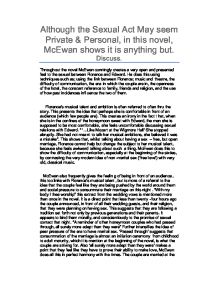 Although the s****l Act May seem Private &amp; Personal, in this novel, McEwan shows it is anything but. Discuss.

Although the s****l Act May seem Private & Personal, in this novel, McEwan shows it is anything but. Discuss. Throughout the novel McEwan cunningly creates a very open and presented feel to the s****l between Florence and Edward. He does this using techniques such as; using the link between Florence; music and theatre, the difficulty of communication, the era in which the couple are in, the openness of the hotel, the constant reference to family, friends and religion, and the use of how past incidences influence the two of them. Florence's musical talent and ambition is often referred to often thru the story. This presents the idea that perhaps she is comfortable in front of an audience (which few people are). This creates an irony in the fact that, when she is in the confines of the honeymoon sweet with Edward, the man she is supposed to be most comfortable, she feels uncomfortable discussing s****l relations with Edward. " '...Like Mozart at the Wigmore Hall' She stopped abruptly. ...read more.

It appears to bind them morally, and conscientiously to the promise of s****l contact that night. "A reminder of other honeymoon couples who had passed through, all surely more adept than they were" Further intensifies the idea of peer pressure of the era to have marital s*x. 'Passed through' suggests that consummation of the marriage is almost an initiation ceremony from childhood to adult maturity, which it is mention at the beginning of the novel, is what the couple are striving for. Also 'all surely more adept than they were' makes a point that they feel like they have to prove their ability to make love, McEwan does all this in perfect harmony with the times. The couple are married at the beginning of the 1960's, when the world is on the cusp of a s****l revolution, to a lack of pressure to have monogamous s****l relationships, especially not in a marriage. This idea proves that the 'swinging sixties' were a break-through from this constant pressure from the older generations, and just to be free, which would suit Edward and Florence very much. ...read more.

There is always this sense with Florence that the root of her fears of being 'penetrated' derive from an experience of paternal incest with 'Mr. Pointing'. McEwan creates the sense that Florence is held back by the memory of being raped by her father, which she tries to keep out of her mind, but can't. He uses a sympathetic, omniscient narrative to explain this to the reader. "She was trying not to think of the [past]"... "Here came the past anyway, the indistinct past"... "She was twelve years old, lying still like this, waiting, shivering, in the narrow bunk, with polished mahogany sides. Her mind was blank, she felt she was in disgrace"... "and her father was [undressing, like Edward now]" When the reader learns of this disgusting, terrible experience in Florence's past, they immediately feel sorry for her, and understand perfectly, why she fears Edward. 'Here came the past anyway', suggests that she is doing all she can to keep it out of her mind so that she can please Edward, but it doesn't work. McEwan creates an irony in that Edward, who is meant to care more for her than any of the readers, is ignorant to this point. ...read more.