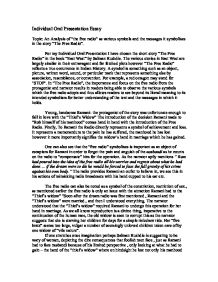 Individual Oral Presentation Essay Topic: An Analysis of "the free radio" as various symbols and the messages it symbolises in the story "The Free Radio". For my Individual Oral Presentation I have chosen the short story "The Free Radio" in the book "East West" by Salman Rushdie. The various stories in East West are largely similar in their extravagant and far fetched plots however "The Free Radio" reflects a true occurrence in Indian History. A symbol is something such as an object, picture, written word, sound, or particular mark that represents something else by association, resemblance, or convention. For example, a red octagon may stand for "STOP". In "The Free Radio", the importance and focus on the free radio from the protagonist and narrator results in readers being able to observe the various symbols which the free radio adopts and thus allows readers to see beyond its literal meaning to its intended symbolism for better understanding of the text and the messages in which it holds. Young, handsome Ramani- the protagonist of the story was unfortunate enough to fall in love with the "Thief's Widow" The introduction of the decision Ramani made to "Rob himself of his manhood" comes hand in hand with the introduction of the Free Radio. Firstly, To Ramani the Radio directly represents a symbol of achievement and loss. It represents a memorandum to the pain he has suffered, the manhood he has lost however it more importantly signifies the widow's hand in marriage which he has gained. ...read more.

The free radio is a perfect symbol of delusion and self deception, the ability to think clearly is instrumental to separating humans from lower forms of animals, a failure in our system however is demonstrated in Ramani where he adjusts his thinking so much that he deceives himself for almost a year "His young body was being poured into that space between his ear and his hand... by a mighty and impossible act of will." Once he receives his radio everything would be made worth while. However one does not dispute Ramani's happiness during that year when his "rare quality of total belief in his dreams" allowed him to lead a happy life-" A happiness which could not be explained by the supposed imminence of the transistor" However in the end, this further humiliation contributed to his decision to leave the village. It is also interesting to note that with his departure, he follows his original true dream and ambition of being a bollywood star in the city and how this dream is juxtaposed against the pseudo fantasy of the free radio, however this bollywood star ambition can also be interpreted as comparable to the free radio , a further assault on the inability Ramani has to embrace reality and deal with failure. "I remember... the huge mad energy which he had poured into the act of conjuring reality." ...read more.

This further encourages readers to trust and believe in teacher Sahib and understand the message being suggested that respecting and listening to the generally wise and experienced elderly is the correct path to safety. Also towards the end of the story "Maybe the views of the old can be discounted now, and if that's so , let it be." This martyr like sentence garners pity and sympathy readers have towards teacher Sahib who although tried his best could not save the foolish Ramani who refused to listen and heed warnings from him. This again emphasises the point of respecting the elderly. In conclusion, the free radio may seem simplistic in the story, a mere gift from the Government, but in reality it has been developed extensively .Through diction , sentence structure , and most importantly the use of the free radio as a symbol in moving the plot along , the free radio not only represents the delusional sentiments of Ramani , the wickedness of the widow but these symbols it takes on of escapism , achievement and loss , restriction of s*x , delusion , deception all work together to emphasise the author's messages of importance of being realistic , wary of the consequences of ones actions, negligence of the opinions of the aged and most importantly the criticism of the government. Jonathan Taylor 5. ...read more.