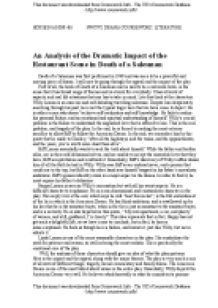 ﻿This document was downloaded from Coursework.Info - The UK's Coursework Database - http://www.coursework.info/ HOSSEIN AMINI 4H NWCW2 DRAMA COURSEWORK: LITERATURE An Analysis of the Dramatic Impact of the Restaurant Scene in Death of a Salesman Death of a Salesman was first performed in 1949 and was seen to be a powerful and moving piece of drama. I will now be going through the appeal and the impact of the play. First of all, the book of Death of a Salesman can be said to be a universal book, in the sense that it has broad range of themes and is a book for everybody. It has all sorts of aspects, and real life situations that one has to take in mind. Lets first look at the characters. w***y Loman is an insecure and self-deluding travelling salesman. Despite him desperately searching through his past, he is not the typical tragic hero that we have come to depict. He is rather a man who doesn?t achieve self-realization and self-knowledge. He fails to realize his personal failure, and an emotional and spiritual understanding of himself. w***y?s crucial problem is the failure to understand the anguished love that is offered to him. This is the real problem, and tragedy of the play. In the end, he is forced to making the most extreme sacrifice to allow Biff to follow the American Dream. In the end, we remember him by his quote that he made to Charley, ?after all the highways, and the trains, and the appointments, and the years, you?re worth more dead than alive?. Biff Loman essentially wants to seek the truth about himself. While the father and brother alike, are in their self-delusional selves, and are unable to accept the miserable lives that they have, Biff accepts failure and confronts it. Essentially, Biff?s discovery of w***y?s affair drains him of all the faith he had in w***y. ...read more.

This idea is clearly implied throughout the book. For example there is Biff?s struggle to get the concept of realism across to his father, there is Happy?s lies and failure, also Bernard?s excellent success, and also Charley?s success even when he was not well liked, and finally, w***y?s failure in life. It is all these ideas that make the play truly astonishing. Now, after describing the play as a whole, I will move on to the restaurant scene, one of the most important scenes in the entire play. It is the climax of the whole Drama. I will first describe the scene then explain and comment on it with quotes. It starts of with the scene in Frank?s Chop House. After Happy meets a particular girl, Miss Forsythe, Biff explains to Happy that he waited six hours to see Bill Oliver, and Oliver didn?t even remember him. He quotes after that, ? I even believed myself that I?d been a salesman for him! And then he gave me one look and- I realized what a ridiculous lie my whole life has been. We?ve been talking in a dream for fifteen years, I was a shipping clerk.? Biff asks where he ever got the idea that he was a salesman for Oliver, he was only a shipping clerk. However, it was w***y?s lies and exaggerations that led him to believe he was a salesman when he actually wasn?t. Then Biff accounts how he stole Bill Oliver?s fountain pen and was disgusted with himself. Happy tells Biff to go tell w***y lies, and say he is thinking about the preposition and then w***y will eventually forget the whole matter. When w***y arrives, he reveals the shocking news, ?I?m not interested in stories about the past or any c**p of that kind because the woods are burning, boys, you understand? There?s a big blaze going on all around. ...read more.

In this way, w***y mixes up professional with personal. w***y, in his understanding of the American Dream, believes that it has no need for professional success; rather, he thinks that one can derive happiness without these things. Essentially, he thinks success derives from immaterial and ephemeral concepts, of being ?well liked? and having ?personal attractiveness?. w***y believes, that because Biff doesn?t respect him anymore, as a father or person, he automatically rejects the American Dream. However, w***y is correct. This knowledge of the crime that w***y has committed tarnishes any emotional aspects, so therefore Biff rejects the whole idea of the fake American Dream, that w***y is so desperate to sell. Another aspect is the symbol of Linda?s stockings. Earlier in the play, w***y was preoccupied with the state of Linda?s stockings and her mending them. Until the restaurant scene, which is the most climatic scene where Biff tries to uncover all the lies surrounding the Loman household, the only subconscious trace of w***y?s adultery is the complete and utter persistence to throw away Linda?s stockings. These stockings are the ultimate symbol of betrayal and guilt, which overpowers w***y. When Biff then rejects his ambitions for him and the American Dream, his Dream also starts to crack. w***y?s delirious interest in the seed shop and the end reveals a lot about him. At that moment w***y is a failure. He is poor, unemployed and has nothing to give to his sons. He tries to give Stanley a dollar to portray to him at least that he does own something. However, it was a pretty pathetic and feeble attempt. Stanley though doesn?t accept it, because at that time he feels dear to w***y since both sons have left him. In addition, the failure to raise Biff the way he wanted means he has to plant some vegetables at least, to prove his labour and to raise something successfully. The quote at the end, ?Nothing?s planted. I don?t have a thing in the ground?, is implying how Biff was able to break free of his American Dream, and the traditions of his family. ...read more.