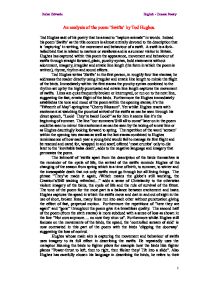 An analysis of the poem 'Swifts' by Ted Hughes.

An analysis of the poem 'Swifts' by Ted Hughes. Ted Hughes said of his poetry that he aimed to "capture animals" in words. Indeed his poem 'Swifts' as the title concurs is almost entirely devoted to the description that is 'capturing' in writing, the movement and behaviour of a swift. A swift is a fork-tailed bird that is related to martens or swallows and is a summer visitor in Britain. Hughes has captured within this poem the appearance, movement and behaviour of swifts through straight forward, plain, punchy syntax, bold statements without adornment, imagery, irregular and erratic line length (the form in which the poem is written), rhyme, rhythm and sound effects. Ted Hughes writes 'Swifts' in the first person, in roughly four line stanzas; he addresses the reader directly using irregular and erratic line length to mimic the flight of the birds. Immediately within the first stanza the punchy syntax combined to the rhythm set up by the highly punctuated and erratic line length captures the movement of swifts. ...read more.

The tone of the poem for the most part is a balance between excitement and haste. Hughes captures the speed in which the swifts move and dart in and out of sight in the use of short, broken lines, many lines run into each other without punctuation giving the effect of fast, perpetual motion. Furthermore the repetitions of "here they are again" and "gone" throughout the poem give it a breathless quality. The second half of the poem (from the sixth stanza) is more subdued with a sense of loss as shown in the line "Not ours anymore.... so now they shun us". Furthermore whilst Hughes still focuses on the movements of the birds, the speed, the 'controlled scream of skid' is now contrasted in this part of the poem with the birds 'clipping the doorway' suggesting the loss of control. Hughes whose main aim is capturing the movement and behaviour of swifts uses imagery to its full effect in describing the swifts. He repeatedly uses the metaphor likening the birds to fighter pilots for example how the birds like fighter planes "Power-thrust to left, then to right, then flicker they/ Tilt into a slide". ...read more.

Apollo within Greek mythology was the sun gods and father to all the gods, and therefore suggests that he worships this swift like a little god. Furthermore Hughes employs an obscure and opaque vocabulary to describe the flight of birds, "Veer on the hard air, toss up over the roof' which adds an almost breathless quality to the poem. As has been said, formal rhyme does not feature within this poem. Indeed like the erratic line length the rhythmic pattern emulates the darting movements of swifts. Hughes uses alliteration also to mimic the birds for example when describing a young swifts attempts to fly it's 'first fling', nearly flying ' misfit which 'flopped' in the yard- the repetition of the soft 'f', 'l' and 's' sounds allows the reader to create an aural image of the birds fluttering wings as well as it 'floundering'. In conclusion, Hughes has captured within this poem the appearance, movement and behaviour of swifts through straight forward, plain, punchy syntax, bold statements without adornment, imagery, irregular and erratic line length (the form in which the poem is written), rhyme, rhythm and sound effects. Helen Edwards English- Unseen Poetry 2 ...read more.