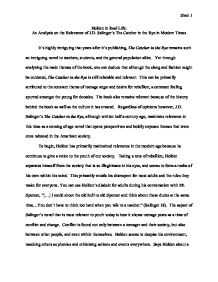 An Analysis on the Relevance of J.D. Salingers The Catcher in the Rye in Modern Times

Holden in Real Life: An Analysis on the Relevance of J.D. Salinger's The Catcher in the Rye in Modern Times It's highly intriguing that years after it's publishing, The Catcher in the Rye remains such an intriguing novel to teachers, students, and the general population alike. Yet through analyzing the main themes of the book, one can deduce that although the slang and fashion might be outdated, The Catcher in the Rye is still relatable and relevant. This can be primarily attributed to the constant theme of teenage angst and desire for rebellion, a common feeling spurred amongst the young for decades. The book also remains relevant because of the history behind the book as well as the culture it has created. Regardless of opinions however, J.D. Salinger's The Catcher in the Rye, although written half a century ago, maintains relevance in this time as a coming of age novel that opens perspectives and boldly exposes themes that were once tabooed in the American society. ...read more.

Holden seems to despise his environment, mocking others as phonies and criticizing actions and events everywhere. Says Holden about a friend of Sally's, "[...] he went to Andover. Big, big deal...He was the kind of a phony that have to give themselves room when they answer somebody's question." (Salinger 165) This is parallel to the infamous teenage stereotype of rebellion and disobedience, as youth today are perceived as arrogant and wanting to create their own rules. The novel provokes emotion within the reader because they are finally able to connect with someone on that level. On that note, the book also connects with a teenager's insecurities and self-evaluation, proven by its usage by other authors. An example of this would be the novel King Dork, in which the main character Tom criticizes his school for lauding The Catcher in the Rye when it really isn't that special. ...read more.

When arrested, Chapman was clutching a copy of The Catcher in the Rye, and wrote inside, "This is my statement" (Ball). In an interview, Chapman stated he "[...] was literally living inside...The Catcher in the Rye" (Chapman). While Chapman was institutionalized, and the connection he made from the book to the murder has yet to be determined, the mystery of the book's inspiration for murder still intrigues people (Ball). In conclusion, The Catcher in the Rye still captures interest from readers today because the message of teenage angst and growth is timeless. The novel is able to effectively portray a teenager's rebellious nature and rejection of society that masks uncertainty of one's own self. It also has a sense of mystery surrounding it, as inspired one of the most well known murders of the 20th century. J.D. Salinger captivates readers because the novel lacks the stereotypical sugar coating of a young adult novel; it gives a true perspective on the trouble of being a teenager and exposes a whole new realm that people can appreciate. ...read more.