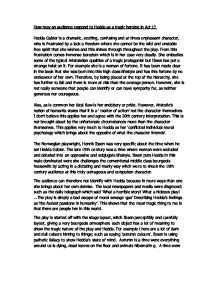 An audience's responce to Hedda gabler in Act 1

How may an audience respond to Hedda as a tragic heroine in Act 1? Hedda Gabler is a dramatic, exciting, confusing and at times unpleasant character, who is frustrated by a lack a freedom where she cannot be the wild and unstable free spirit that she wishes and this shines through throughout the play. From this frustration comes immense boredom which is in her case very deadly. She embodies some of the typical Aristotelian qualities of a tragic protagonist but Ibsen has put a strange twist on it. For example she is a woman of fortune. It has been made clear in the book that she was born into this high class lifestyle and has this fortune by no endeavour of her own. Therefore, by being placed at the top of the hierarchy, she has further to fall and there is more at risk than the average person. ...read more.

The audience can therefore not identify with Hedda because in more ways than one she brings about her own demise. The local newspapers and media were disgraced; such as the daily telegraph which said 'What a horrible story! What a hideous play! ...The play is simply a bad escape of moral sewage-gas' Describing Hedda's feelings as 'the foulest passions in humanity'. This shows that the most tragic thing to me is that there are people her in this world. The play is started off with the stage layout, witch Ibsen perceptibly and carefully layout, giving a very bourgeois atmosphere each object has a lot of meaning to show the tragic nature of the play and Hedda. For example there are a lot of dark and dull colours hinting to things; such as saying 'autumn colours'. Ibsen is using pathetic fallacy to show Hedda's state of mind. Autumn is a time were everything around us is dying, dead leaves on the floor and animals hibernating. ...read more.

This is shown towards the beginning of Act1 were she call's Miss Tesman's hat to be servants hat. As Miss Tesman is Mr Tesman's mother figure she should also traditionally be Hedda's too, so by disrespecting like that would cause the audience to empathise with Miss Tesman and detest Hedda and her behaviour. Hedda also has a very unusual characteristics she presented by Ibsen in a very masculine way. By doing this she is emasculating George Tesman. To begin with he does this himself with Mrs Tesman, the keyword for the first is claustrophobic for Hedda; witch, with me, causes some sympathy for Hedda. With a combination of the childish nicknames (like Georgie and aunty juju) and the dreaded flowers make it as much cringe worthy to the audience as it was to Hedda, which is shown when they leave when The most prominent way that this is done is through the pistols, General Gabler's pistols. Hedda manely- pistols Although ...read more.