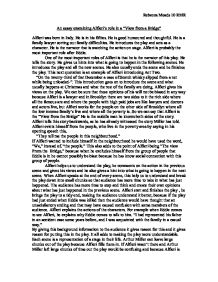 An essay examining Alfieri's role in a

An essay examining Alfieri's role in a "View from a Bridge" Alfieri was born in Italy. He is in his fifties. He is good humoured and thoughtful. He is a family lawyer sorting out family difficulties. He introduces the play and acts as a character. He is the narrator that is watching the action on stage. Alfieri is probably the most important role after Eddie. One of the most important roles of Alfieri is that he is the narrator of this play. He tells the story. He gives us hints into what is going to happen in the following scenes. He introduces the play and all the new scenes. He also usually ends the scene and he finishes the play. This next quotation is an example of Alfieri introducing Act Two. "On the twenty-third of that December a case of Scotch whisky slipped from a net while being unloaded-". This introduction goes on to introduce the scene and what usually happens at Christmas and what the rest of the family are doing. Alfieri gives his views on the play. We can be sure that these opinions of his will not be biased in any way because Alfieri is a lawyer and in Brooklyn there are two sides to it the rich side where all the famous are and where the people with high paid jobs are like lawyers and doctors and actors live, but Alfieri works for the people on the other side of Brooklyn where all the low income family's live and where all the poverty is. ...read more.

It is like he knows what the audience is going to think, so change the views of the audience he makes this statement. If the audience did not suspect that there was some thing "not right" about Eddie then when Alfieri makes this comment the audience would question why he said this and then that would also give the clue that Eddie mite do some thing worse or something that would harm Catherine. He introduces Eddie and shows us that the focus is going to be on him. Alfieri gives the play meaning. If Alfieri wasn't there the play would appear to the audience meaningless. This piece of theatre would just appear to be a story about a family, in which the uncle had feelings for his niece that he shouldn't have had. It would have appeared to the audience that somebody wanted to write a story about a family troubles and that was it. When Alfieri is there he adds that little extra that brings the play to life. By giving his opinion and stating the goings on in the play he links the audience to the actors on stage making the play seem more important. The audience's emotions would be stronger and therefore they would feel that the play has more of a meaning than it just being about a family with troubles about love. ...read more.

Marco says that in Italy Eddie would be dead now for what he has done, "In my country he would be dead now. He would not live this long" Alfieri then explains that, that is not the case in America that to obey the law you must not kill anybody regardless of what crime they have committed to harm you. Alfieri also states that if the women is born here then the man from another country can marry her and start to become an American citizen. It is important that Alfieri states the law throughout so that the audience are clear what the characters rights are and if they do some thing illegal they know whether it is illegal or not and they are clear about what is happening. Alfieri has a very important role within the play and he carries out many roles as you have seen in the paragraphs above. Alfieri's role is to be the narrator of the play, to outline the Law and Justice, to introduce Red Hook and America in general. To create meaning and atmosphere and to remind the audience that certain characters are not as they first seem. For example he sympathises with Eddie. Alfieri is one of the most important characters in this book he holds the play together and ties all the loose ends up of the play and he brings the play to an appropriate end. Rebecca Meads 10 RMR ...read more.