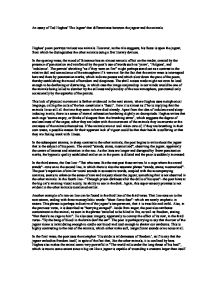 An essay of Ted Hughes' 'The Jaguar' that differentiates between the jaguar and the animals. Hughes' poem portrays various zoo animals. However, as the title suggests, his focus is upon the jaguar, from which he distinguishes the other animals using a few literary devices. In the opening verse, the mood of faineance has an almost narcotic effect on the reader, created by the presence of punctuation and reinforced by the poet's use of words such as 'yawn', 'Fatigues', and 'indolence'. The parrots' shrieking "as if they were on fire" might perhaps stand out as a contrast to the relative dull and somnolence of the atmosphere if it were not for the fact that the entire verse is interrupted here and there by punctuation marks, which indicate pauses and which slow down the pace of the poem, thereby establishing the mood of boredom and sleepiness. The shrill noises made might not even be loud enough to be deafening or distracting, in which case the image conjured up in our minds would be one of the animals being lulled to slumber by the stillness and placidity of the zoo atmosphere, punctuated only occasionally by the squawks of the parrots. ...read more.

The crowd "stands, stares, mesmerized", observing the jaguar, apparently the centre of interest and attention in the zoo. As the lines are longer and disrupted by fewer punctuation marks, the hypnotic quality established earlier on in the poem is diluted and the pace is suddenly increased. In the third stanza, the first line--"But who runs like the rest past these arrives At a cage where the crowd stands"--runs on to the second line, in which there is also the assonant phrase "stands, stares, mesmerised". The poet's repetition of similar vowel sounds in successive words, coupled with the accompanying commas, seems to enhance the sense of awe and majesty about the jaguar, something that is not observed in the other animals. In the fourth line--"Through prison darkness after the drills of his eyes"--the poet hints at the big cat's amazing visual acuity, its ability to see in the dark. Again, this super-sensory prowess is not evident in the other animals mentioned earlier. Another example of a run-on line can be found in the third line of the third verse. ...read more.

Hughes also makes the animal seem very powerful in "The world rolls under the long thrust of his heel", which is true to some extent since a big cat like a jaguar is capable of wounding a creature larger than itself. Summarily Hughes uses imagery, enjambment, and assonance to distinguish the jaguar from the other animals. The jaguar is interesting to look at, due to its ability to attract a crowd, and able to feel human emotions like fury and satisfaction, unlike the rest of the animals which only experience boredom and soporific sensations. This is further supported by the fact that the poet refers to the animal as "him", instead of "it". It is an august image in comparison to the sleeping animals and has a sense of vigour about it that is missing in the other inhabitants of the zoo. Furthermore, it is capable of evoking our feelings; its roar inspires our fear. Again, this is something not observed in the other animals, which appear impervious to any sensation except that of sleepiness and which seem incapable of eliciting feelings and responses from their observers. While the jaguar is very much alive, the other animals are almost dead. ...read more.