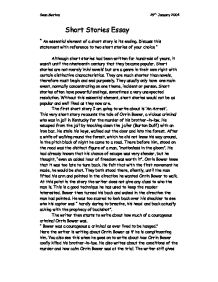 An essential element of a short story is its ending. Discuss this statement with reference to two short stories of your choice

Short Stories Essay " An essential element of a short story is its ending. Discuss this statement with reference to two short stories of your choice " Although short stories had been written for hundreds of years, it wasn't until the nineteenth century that they became popular. Short stories are not merely 'mini novels' but are a genre in their own right with certain distinctive characteristics. They are much shorter than novels, therefore must begin and end purposely. They usually only have one main event, normally concentrating on one theme, incident or person. Short stories often have powerful endings, sometimes a very unexpected resolution. Without this essential element, short stories would not be as popular and well liked as they now are. The first short story I am going to write about is 'An Arrest'. This very short story recounts the tale of Orrin Bower, a vicious criminal who was in jail in Kentucky for the murder of his brother-in-law. He escaped from the jail by knocking down the jailer (Burton Duff) with an iron bar. He stole his keys, walked out the door and into the forest. After a while of walking round the forest, which he did not know his way around, in the pitch black of night he came to a road. There before him, stood on the road was the distinct figure of a man, "motionless in the gloom". ...read more.

The first family was the Tuvaches, who had three girls and one boy. The second family was the Vallins, who had three boys and one girl. They all lived on a merged diet of soup, potatoes and fresh air. Now as you can see from this, the writer portrays the families as peasant farmers, who are very poor. He does this by the way he describes things such as the food that they eat. One August afternoon a horse and trap drew up unexpectedly outside the two cottages. The young women in it started talking about how the children were so pretty and how she would love to have one. The writer chooses this language to make the young lady sound as if she just wants to pick a child and take them, like getting a toy from a shop. A few days later the lady came back again, and gave them cakes and sweets. She then came back again, got to know the parents, and started making a daily appearance with her pockets bulging with sweets. Here the writer is trying to make it sound like the lady is trying to buy the children's hearts with cakes and sweets. The children come from poor backgrounds, therefore the only time they get things like this is when the lady comes to the cottages. The lady's name was Madame d' Hubires. ...read more.

He told them that he blamed them because he didn't get a chance in life. He said, "O' course I blame you, I blame you for being so soft in the head. Parents like you are the reason children get held back. It'd serve you right if I upped sticks and off." This twist will have come as a very big shock to the readers, as they were probably expecting Charlot to be happy his parents kept him. The writer makes him look very ungrateful. His mother started crying talking about how she had killed herself bringing up kids for nothing. So Charlot stood up and walked out the house shouting, "know what you are, stupid bogtrotting yonkels!" and with that he vanished into the night. So as you can see the ending was the total opposite to what you would expect. So at the end of the story, the Vallins were reunited and the Tuvaches were split up. The setting of the story fits in very well because it shows how poor the families were and why the money from selling the child was so important. I think the moral of this story is ' In some situations, there is never a right answer.' I think in both of the short stories I have written about the ending has dramatically changed the story for the better. The writer has done this by carrying the same theme all the way through the story, but has still managed to create the unpredictable ending needed to make any short story successful. Sean Morton 29th January 2004 ...read more.