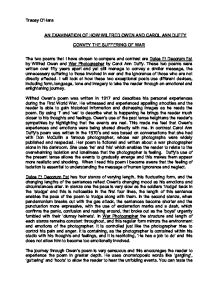 An examination of how Wilfred Owen and Carol Ann Duffy convey the suffering of War.

Tracey O'Hara AN EXAMINATION OF HOW WILFRED OWEN AND CAROL ANN DUFFY CONVEY THE SUFFERING OF WAR The two poems that I have chosen to compare and contrast are Dulce Et Decorum Est by Wilfred Owen and War Photographer by Carol Ann Duffy. These two poems were written over fifty years apart and yet still manage to convey a similar message, the unnecessary suffering to those involved in war and the ignorance of those who are not directly affected. I will look at how these two exceptional poets use different devises, including form, language, tone and imagery to take the reader through an emotional and enlightening journey. Wilfred Owen's poem was written in 1917 and describes his personal experiences during the First World War. He witnessed and experienced appalling atrocities and the reader is able to gain historical information and distressing images as he reads the poem. By using 'I' and 'we' to describe what is happening he brings the reader much closer to his thoughts and feelings. Owen's use of the past tense heightens the reader's sympathies by highlighting that the events are real. This made me feel that Owen's experiences and emotions were being shared directly with me. In contrast Carol Ann Duffy's poem was written in the 1970's and was based on conversations that she had with Don McCullin a famous photographer, whose war photographs were widely published and respected. ...read more.

Although Duffy does highlight some senses, the quietness in the darkroom is compared to 'A priest preparing to intone a mass'; I felt the language used in her poem was not as sensuous. She was more implicit, using symbolic language with several meanings like 'dust', 'solution' and 'ordered rows', enabling the reader to make up their own mind about the many issues. Both poems contain clear, powerful and disturbing imagery. Owen uses similes and metaphors to strengthen this imagery: 'Bent double, like old beggars under sacks', 'Knock-kneed, coughing like hags'. These comparisons allow the reader to visualize the physical and mental change in the men, from the healthy young boys that set out for war, to being compared to old men unable to function properly. Duffy uses contrasting images of the horror in the war torn Country, 'blood stained into foreign dust', and the pathetic suffering in 'Rural England' that 'simple weather can dispel'. She also uses images of children running through mine fields to bring out the readers protective instincts, making them feel guilty about the injustices being suffered by the innocent. The honesty of her images makes it difficult for the reader to ignore them, they manage to hit a raw nerve, but as she suggests in her poem this 'prick' of conscience will be just momentary. ...read more.

In Duffy's poem she focus on the wider social implications of war, as well as the dying men she sympathizes with the suffering wife, and the children that are forced to live in this dangerous environment. She shows her bitterness at the attitude and lack of compassion of those living in England by contrasting the atrocities of war 'a hundred agonies in black-and-white' with the fickleness of people in 'Rural England'; 'eyeballs prick with tears between the bath and pre-lunch beers' and then life goes on as normal. Although these two poems are different in style, language and content, the underlying message contained within them is very similar. They both describe how remoteness of war leads to ignorance and misunderstanding, while the plight and suffering of innocent adults and children is neglected. I found Dulce Et Decorum Est the more disturbing and upsetting poem because it was based on true life experiences; but with modern weapons and propaganda, these are situations and circumstances that should not occur again. The poem War Photographer I could relate more to because it typifies people's attitude and indifference to war today; out of sight, out of mind. Carol Ann Duffy is probably right in her analysis because although when reading her poem, I had enormous sympathy for those suffering in remote wars today, I will, like those mentioned in her poem, continue with my own life without giving them any further thought. ...read more.