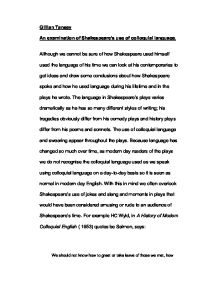 An examination of Shakespeare's use of colloquial language. Although we cannot be sure of how Shakespeare used himself used the language of his time we can look at his contemporaries

Gillian Tansey An examination of Shakespeare's use of colloquial language. Although we cannot be sure of how Shakespeare used himself used the language of his time we can look at his contemporaries to get ideas and draw some conclusions about how Shakespeare spoke and how he used language during his lifetime and in the plays he wrote. The language in Shakespeare's plays varies dramatically as ha has so many different styles of writing; his tragedies obviously differ from his comedy plays and history plays differ from his poems and sonnets. The use of colloquial language and swearing appear throughout the plays. Because language has changed so much over time, as modern day readers of the plays we do not recognise the colloquial language used as we speak using colloquial language on a day-to-day basis so it is seen as normal in modern day English. With this in mind we often overlook Shakespeare's use of jokes and slang and moments in plays that would have been considered amusing or rude to an audience of Shakespeare's time. For example HC Wyld, in A History of Modern Colloquial English ( 1953) quotes be Salmon, says: We should not know how to greet or take leave of those we met, how to express our thanks in a subtle manner, how to ask for a favour, pay a compliment, or send a polite message to a gentleman's wife..We should hesitate every minute how to address the person we are talking to. ...read more.

We have changed them slightly in modern day English, for example instead of 'good morrow' we would use 'good morning' and instead of 'good even' we would say 'good evening'. It is likely that we would only use 'God bless you' or God save you' in the religious context. In modern day English greetings it is very common to comment on the weather, for example; 'Good morning, nice day isn't it'. Commenting on the weather in Shakespearean time did not occur. A main reason for commenting on the weather is that it makes it easier to begin a conversation, particularly with strangers. Commenting on the weather in greetings makes it easier for everybody to speak to one another. As the weather is so changeable it is something we all have knowledge about and if it were a nice day the other person would not disagree with them. As well as greeting changing from today's usage, the partings that were most frequently used have also changed. Dismissals had varying degrees of politeness whilst dismissing a servant or an intimate. Invitations to leave for example appear in: Merry Wives of Windsor, act 2: scene1: line 139. Mrs Ford: Will you go, Mistress Page? Mrs Page: Have with you. Shall we wag? This was also a popular parting, this was used as friendly invitations to leave, to equals. Shall we s**g? Farewell/Adieu - This was a neuteral greeting used interchangeably and could be used together. ...read more.

In Shakespearean time the people seemed to be more aware of the status of other people, unlike now we do not frequently use the words 'madam' or 'your Lordship' as they people of his time would of. When we address people as often as people as often as the 1600's did, and it is rare that we need to know some people very closely in order for us to be able to use each others nicknames. It is commonly known that the use of nicknames can be used with anybody and probably even more likely with people that we do not know aswell as others as that is what everybody call this person and we do not want to feel like outsiders, whereas if we lived in the 1600s we would feel like outsiders if we used this form of address. There are many noticeable differences between speakers of this age and speakers of the 17th Century. As stated at the beginning of this essay in Wylds quote, it would be very difficult for us to work out how to speak to servants, knights or Sirs and also ordinary men and women. We have changed the way we address each other so dramatically and it is difficult to understand every aspect of the unique aspects of Shakespearean language. As time progresses and our language evolves the way we speak and use language will keep changing as it has from Shakespeare's time of writing and performing to that of out modern day English. ...read more.