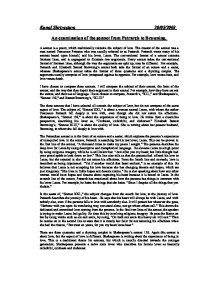 An examination of the sonnet from Petrarch to Browning.

Kunal Shrivastava 20/05/2003 An examination of the sonnet from Petrarch to Browning. A sonnet is a poem, which traditionally contains the subject of love. The creator of the sonnet was a man named Francesco Petrarca who was usually referred to as Petrarch. Petrarch wrote many of his sonnets based upon himself, and his lover, Laura. The conventional format of a sonnet contains fourteen lines, and is segregated to illustrate two arguments. Every sonnet takes the conventional format of fourteen lines, although the way the arguments are split up, may be different. For example, Petrarch and Elizabeth Barrett Browning's sonnet both take the format of an octave and a sestet, whereas Shakespeare's sonnet takes the format of three quatrains and a rhyming couplet. The arguments usually comprise of love juxtaposed against its opposite. For example, love versus hate, and love versus death. I have chosen to compare three sonnets. I will compare the subject of their sonnet, the form of the sonnet, and the way that they depict their argument in their sonnet. For example, how they have set out the sonnet, and their use of language. I have chosen to compare, Petrarch's, "XLL," and Shakespeare's, "Sonnet 138," and Barrett Browning's, "XLIII." The three sonnets that I have selected all contain the subject of love, but do not compose of the same aspect of love. The subject of, "Sonnet XXL," is about a woman named Laura, with whom the author Francesco Petrarch fell deeply in love with, even though she did not return his affections. Shakespeare's, "Sonnet 138," is about the experience of being in love. He writes from a masculine perspective, describing his lover as, "Unchaste, unfaithful, and dishonest." Elizabeth Barrett Browning's, "Sonnet XLIII," is about the quality of love. She is writing about her present husband, Browning, to whom she fell deeply in love with. The Petrarchan sonnet is in the form of an octave and a sestet, which explores the persona's experience of unrequited love. ...read more.

It almost exaggerates it, to emphasise how much he wants to find her. 'Peace,' and, 'sought,' are good uses of metaphorical language. It gives us the impression of a war and a hunt for something. Antinomy is used in the second line, where Petrarch writes, "O my sweet warrior foe." The two words sweet, and warrior oppose each other. He is saying that she is sweet, but she is also against him, she doesn't like him. In the third and fourth lines, Petrarch elevates Laura to the highest point possible, as a proud spirit. "Had your proud spirit to look down so low." This is a great use of metaphorical language, because Petrarch is comparing her to a godly figure. The last word of line four contains the word, "enchain." This word gives us connotations with capture, imprisonment. In the last four lines of the Petrarchan sonnet, and also throughout the rest of the sonnet, Petrarch's heart is referred to as, "my heart, that heart, it is no longer mine." This is a use of metaphorical language again. Petrarch has made the heart a person, giving it movement and decisions. For example, the heart has left its rightful place to stay with Laura. "If driven forth, it cannot find at all, harbour with you upon its wandering way." Along with the metaphorical use of the heart, Petrarch has added more imagery to support it. Words like, "driven, stand alone, stray," give a better view of the hearts journey. In the rhyming couplet, metaphorical language is used once again. "On both our souls this heavy sin will rest, but most on yours, for you my heart loves best." The metaphorical language is used to emphasise how heavy the sin is between them. This sentence could also be hyperbolic because Petrarch is over - exaggerating how much of a sin this is. There is also metaphorical language on the last sentence of the rhyming couplet, where the heart is portrayed as a character, and that it loves Laura best. ...read more.

It rhymes with the word lies, and also has the meaning that the world has false feelings, it is intensive. Certain parts in the sonnet have been specially created to be emphasised. What I mean is that when reading the poem, certain words seem to stand out from the rest, because of the tome of voice and the context the words are in. for example, "simply I credit her false-speaking tongue." The last part of the sentence seems to stand out more than the beginning of the sentence. Shakespeare has done this for a reason, to give meaning to the words that he has specially placed. "False-speaking tongue," is again another reminder from Shakespeare that one of the characters is lying. Another example of a word that stands out from the rest is in the third quatrain, just after the rhetorical question. "O!" Shakespeare has hugely emphasised this word to give meaning to it. It is a sign of relief. This sort of emphasis on words continues throughout the sonnet to give meaning and life to it. Basically, the rhythm and rhyming is by far the most unique of the three sonnets. In conclusion, I think that Shakespeare's sonnet 138 was by far the most exceptional sonnet out of the three that I have chosen. I think this because of his motivating subject, and the way he has used different techniques of language and imagery. I think that his sonnet depicts the subject of love very well. Petrarch's sonnet was the second best sonnet out of the three, again for its subject. I felt that it didn't compose of the same ingredients as Shakespeare's sonnet, and it didn't contain as many uses of language and imagery as Shakespeare's did. I found that Elizabeth Barrett Browning's sonnet was not as good as the other two because of the way she used very little language and imagery, and because of the way that her subject was constant throughout the sonnet. All three sonnets portrayed their subject well, and used many techniques such as imagery and rhyme, which helped the reader understand each sonnet more. ...read more.