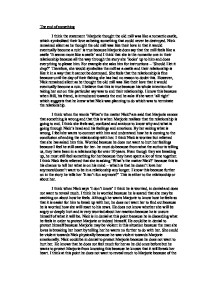 An example of Hemmingway writing positively is when he writes about the reaction of Marjorie in lines 96 - 106. Instead of her being angry, upset, and very emotional at having found out that Nick wants to end the relationship

The end of something I think the statement 'Marjorie thought the old mill was like a romantic castle, which symbolised their love as being something that could never be destroyed. Nick remained silent as he thought the old mill was like their love in that it would eventually become a ruin' is true because Marjorie does say that the mill feels like a castle 'It seems more like a castle' and I think that she is the romantic one in their relationship because all the way through the story she 'looks' up to him and does everything to please him. For example she asks him for instructions - 'Should I let it drop?' Therefore, she would symbolise the mill as a castle and their relationship is like it in a way that it cannot be destroyed. She feels that the relationship is fine because until the day of their fishing she has had no reason to doubt this. However, Nick remained silent as he thought the old mill was like their love that it would eventually become a ruin. I believe that this is true because his whole intention for taking her out on this particular say was to end their relationship. I know this because when Bill, his friend, is introduced towards the end he asks if she went 'all right' which suggests that he knew what Nick was planning to do which was to terminate the relationship. I think when the words 'What's the matter Nick? are said that Marjorie sences that something is wrong and that this is when Marjorie realises that the relationship is going to end. I think she feels sad, confused and anxious to know why and what is going through Nick's head and his feelings and emotions. By her asking what is wrong, I feel she wants to connect with him and understand how he is coming to the conclusion of ending the relationship with her. ...read more.

But she keeps her dignity. She just goes, with no fight, no crying and no bad feelings. She turns down his offer which could give the advantage towards her because he broke up with her and now she doesn't want his love. Its like he rejected her in continuing the relationship and she rejected his offer to help her on her way. I think Bill shows an interest in fishing, concern for Marjorie, and concern for Nick. I think he shows an interest in fishing because he goes over to the fishing rods - 'Bill selected a sandwich from the lunch basket and walked over to have a look at the rods.' He must like fishing because he went over the check the rods. He could have done this because he had an interest in them. If he didn't, I don't think he would have gone over to them. He is concerned about Marjorie because he asks 'did she go all right'. I think Bill may feel a bit guilty because he knew that they were going to break up today, but did nothing to prevent the hurt she could feel. He could have warned her, but it appears that Bill is Nicks friend, therefore he would keep his feelings about the matter to himself, and not get involved. He obviously cares for Nick because he is there when his friend is splitting up with his long-term girlfriend. He knew in advance because he asks 'if she went all right?' These are words from a man who knew the situation, so Nick must have discussed this with him. He cares for Nick because he asks how he feels - 'how do you feel?' Bill is concerned about Nicks emotions and therefore he must be concerned for him. I think Bill is just a good friend who is understanding about the situation, and that he is there for Nick no matter what the outcome is. WORDS AT WORK Hemmingway uses short sentences in his stories. ...read more.