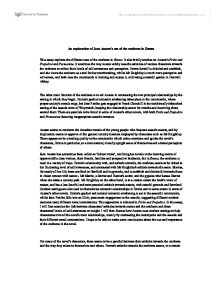 An exploration of Jane Austen's use of the outdoors in Emma

An exploration of Jane Austen's use of the outdoors in Emma This essay explores the different uses of the outdoors in Emma. It also briefly touches on Austen's Pride and Prejudice and Persuasion. It examines the way Austen subtly uses the attitudes of various characters towards the outdoors to reflect their levels of self-awareness and perception. Emma herself is deluded and snobbish, and she views the outdoors as a tool for her matchmaking, whilst Mr Knightley is much more perceptive and self-aware, and both uses the countryside in farming and enjoys it, cultivating a tasteful garden in Donwell Abbey. The other main function of the outdoors is to aid Austen in contrasting the two principal relationships by the setting in which they begin. Emma's gradual romantic awakening takes place in the countryside, where proper society's morals reign, but Jane Fairfax gets engaged to Frank Churchill in the traditionally debauched setting of the seaside town of Weymouth, keeping the relationship secret for months and deceiving those around them. There are parallels to be found in some of Austen's other novels, with both Pride and Prejudice and Persuasion featuring inappropriate seaside romance. Austen seems to condemn the decadent morals of the young people who frequent seaside resorts, and by implication seems to approve of the genteel country manners displayed by characters such as Mr Knightley. There appears to be a healing quality to the countryside which calms emotions and guides the novel's characters, Emma in particular, to a more natural, morally upright sense of themselves and a better perception of others. Jane Austen has sometimes been called an 'indoor writer', confining her novels to the drawing rooms of upper-middle class women, their friends, families and prospective husbands, but in Emma, the outdoors is used in a variety of ways. Emma's relationship with, and attitude towards, the outdoors seems to be linked to her fluctuating level of self awareness, and contrasted with Mr Knightley's attitude towards the same. ...read more.

Confused about Frank Churchill's flirtation at the picnic and "less happy than she had expected"19, she cruelly says that Miss Bates may have trouble participating in a game of Frank's invention because she "will be limited as to number" and only allowed to say "three dull things" . This to a woman whom "no one named without good will,"21 and in the company of Jane Fairfax, Miss Bates' niece. Perhaps, having been limited to drawing rooms and dinner parties, the freeing, more liberal atmosphere of the picnic combined with the flush of "being flattered"22 by Frank's attentions cause her to lose her usual manner. It seems to be the break in routine that provokes her outburst. It is hard to imagine her being so tactless and mean in her sitting room in Hartfield or dining at Randalls. The fact that the Eltons, who usually impose their seniority on Emma implicitly, almost openly insult Emma's intelligence is another sign that the freedom of the outdoors seems to bring out usually suppressed thoughts and actions. When everyone in the group is asked (by Frank) to tell Emma what they are thinking, Mrs Elton exclaims, '7 should not have thought myself privileged to enquire. Though, perhaps as the Chaperon of the party-", and Mr Elton replies "Quite unheard of - but some ladies say any thing. Everybody knows what is due to you."22 After the picnic, Mr Knighley reproaches Emma, who begins to feel remorse and realise the damage she has done to those around her. When she learns of Frank and Jane Fairfax being engaged, and upon finding Harriet not put out at all, she realises that Mr Knightley is in fact the mysterious man she desires. The latter leaves for London, and Emma begins to believe he might be consulting his brother about marrying her friend. As Emma realises the depth of her feelings for Mr Knightley and begins to feel hopeless about "the loss of her mood. ...read more.

Austen's heroines are passionate in a reserved and proper manner, and the most dangerous or dramatic thing Jane does is to risk catching a cold on a short walk. As mentioned before, this is comparable to Elizabeth Bennet's three-mile morning walk through the mud to see her sister. Jane's motive is presumably a secret love letter, and though they share a certain concern for their loved ones and fearlessness of the elements, Jane's walk may not necessarily indicate the same love of nature that inspires Lizzie not to take a carriage or any other means of transport, instead showing an intense wish to read the letter as soon as possible. Though the large majority of Austen's novels take place inside the homes of the upper-middle class gentry, nature is always close, and of great significance. The outdoors serves as a moral touchstone by which to judge characters - those with negative or fanciful attitudes towards the countryside are generally unpleasant characters, and the most down-to-earth and honest characters tend to have a healthy, practical view of the land around Highbury. Contrasting the countryside with the seaside helps to characterise the main relationships between Frank and Jane, and Emma and Mr Knightley. Frank's engagement, formed at the seaside, is shrouded in secrecy and deceit, and his behaviour throughout the book complies with the traditional debauchery of seaside resorts, whereas Emma's very appropriate engagement to Mr Knightley is formed without scandal and with the utmost consideration for her family. The settings of these two love stories highlight Austen's appreciation of well-mannered, unpretentious country-dwelling people, and her disapproval of the decadence of seaside towns where young men and women roam unchecked, as well as those inhabitants of the countryside who seem frightened of the outdoors, such as Emma's valetudinarian father. The outdoors seems to allow characters to somehow heal, or grow into something more than they once were, seeing their feelings more clearly and behaving with more moral integrity, honesty as well as more naturally. ...read more.