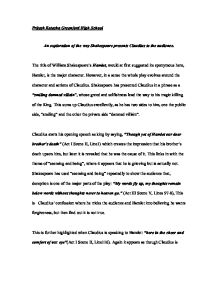 An exploration of the way Shakespeare presents Claudius to the audience.

Pritesh Kotecha Greenford High School An exploration of the way Shakespeare presents Claudius to the audience. The title of William Shakespeare's Hamlet, would at first suggested its eponymous hero, Hamlet, is the major character. However, in a sense the whole play evolves around the character and actions of Claudius. Shakespeare has presented Claudius in a phrase as a "smiling damned villain", whose greed and selfishness lead the way to his tragic killing of the King. This sums up Claudius excellently, as he has two sides to him, one the public side, "smiling" and the other the private side "damned villain". Claudius starts his opening speech as king by saying, "Though yet of Hamlet our dear brother's death" (Act I Scene II, Line1) which creates the impression that his brother's death upsets him, but later it is revealed that he was the cause of it. This links in with the theme of "seeming and being", where it appears that he is grieving but is actually not. Shakespeare has used "seeming and being" repeatedly to show the audience that, deception is one of the major parts of the play: "My words fly up, my thoughts remain below words without thoughts never to heaven go." ...read more.

Pritesh Kotecha Greenford High School Shakespeare uses repetition a great deal in Claudius' speech, and in this case he uses it to outline Claudius' intelligence, like any politician, he uses rhetoric as a way to manipulate people: "your father lost a father, that father lost" (Act I Scene II, Line 89 and 90), here he is trying to persuade Hamlet that it's all part of the circle of life. This is important as it outlines his guilt that Hamlet is grieving for his father so much, and in a way is trying to make him stop mourning to make himself feel better. He even digs so low as he says to Hamlet, you grieving so much is a sin: "'tis a fault to heaven, a fault against the dead, a fault to nature" (Act I Scene II, Line 101 - 2). Moreover, he again gives himself away unconsciously as he tries so hard to make Hamlet stop grieving. Shakespeare has presented Claudius as a skilled politician in this sentence because again he structures it in three parts, and again repetition is used, to make bold the main point he is trying to get across; your grieving is wrong. ...read more.

Although Shakespeare has Pritesh Kotecha Greenford High School presented him to have strong feelings towards Gertrude, his greed and selfishness overrule his love for her: "Gertrude do not drink...[aside] It is the poison'd cup. It is too late."(Act V Scene II, Lines 294...296) Just because he wants to get his own way, he jeopardizes her life and throughout the play, his actions lead to the death of seven innocent people, because he cannot resist his temptation and has to cover up his crime. In conclusion, Claudius is portrayed as a good king with bad qualities. Although he does have some good aspects as king, him being intellectual and powerful, his bad qualities over weigh his good. In a sense that, he is greedy and selfish, putting his own desire first, and going to any limits to reach his goal. Shakespeare has presented him excellently, "with witchcraft of his wit"(Act I Scene V, Line 43) allowing him to conceal his true colours, except for when he repented and confessed to God. Throughout the play, Shakespeare uses one good quote to define his character as; "smiling damned villain"(Act I Scene V, Line 106), as it shows that he has two sides to him in every way, public and private, caring and selfish, and cleaver but not very wise. ...read more.