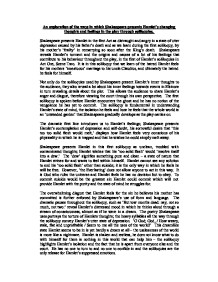 An exploration of the ways in whichShakespeare presents Hamlet's changing thoughts and feelings in the playthrough soliloquies.

An exploration of the ways in which Shakespeare presents Hamlet's changing thoughts and feelings in the play through soliloquies. Shakespeare presents Hamlet in the first Act as distraught and angry in a state of utter depression caused by his father's death and as we learn during the first soliloquy, by his mother's 'frailty' in remarrying so soon after the King's death. Shakespeare reveals Hamlet's torment and the origins and causes of a lot of his feelings that contribute to his behaviour throughout the play, in the first of Hamlet's soliloquies in Act One, Scene Two. It is in this soliloquy that we learn of the hatred Hamlet feels for his mothers 'incestuous' marriage to his uncle Claudius, and ultimately the hatred he feels for himself. Not only do the soliloquies used by Shakespeare present Hamlet's inner thoughts to the audience, they also reveal a lot about his inner feelings towards events in Elsinore in turn revealing details about the plot. This allows the audience to share Hamlet's anger and disgust, therefore viewing the court through his own perspective. The first soliloquy is spoken before Hamlet encounters the ghost and he has no notion of the vengeance he has yet to commit. The soliloquy is fundamental in understanding Hamlet's state of mind, the isolation he feels and how he feels that the whole world is an 'unweeded garden' that Shakespeare gradually develops as the play carries on. The dramatic first line introduces us to Hamlet's feelings; Shakespeare presents Hamlet's contemplation of depression and self-doubt, his sorrowful desire that 'this too too solid flesh would melt,' displays how Hamlet feels very conscious of his physicality in which he is trapped and that he wishes he could simply melt away. Shakespeare presents Hamlet in this first soliloquy as unclean, troubled with contaminated thoughts; Hamlet wishes that his 'too solid flesh' would 'resolve itself into a dew.' ...read more.

The exaggerated hyperbole of 'He would drown the stage with tears' shows how Hamlet feels enraged with himself that he cannot bring forth such emotion. It is his own father who has been murdered and Hamlet is outraged with himself that he cannot react or take revenge in the way the player can. However, Hamlet is perhaps forgetting that the player is doing his job, he is an actor and Hamlet is not. Perhaps Shakespeare presented Hamlet's thoughts in this way to convey the irrationality of Hamlet's condemnation for himself. Hamlet's unfavourable comparison of himself to the player just doesn't seem reasonable. It could be that Shakespeare portrayed this comparison unreasonably in order to provoke a feeling of compassion for Hamlet amongst the audience. Shakespeare clearly presents Hamlet as full of self-hatred. Hamlet wishes he could be the player and 'amaze indeed the very faculties of eyes and ears,' but as his change of thought shows, he cannot act as the player does. Hamlet mocks himself and procrastinates about his own procrastinating. This self-hatred is caused by his delaying and yet he carries on delaying and only thinking about how terrible he is instead of doing something about it. He is 'unpregnant of [his] cause, / And can say nothing; no, not for a king.' The sarcasm used here enforces how Hamlet feels such loathing for himself - the player can produce powerful emotion for absolutely nothing whereas Hamlet cannot produce even the slightest amount for a king. He reiterates the reason for why he should act and then goes on to question himself, 'Am I a coward?' Hamlet constantly reproaches himself for inaction; the self-hatred he feels towards himself is vivid throughout the soliloquy. He calls himself 'pigeon livered and lack gall,' the exaggerated language expresses the bitterness that Hamlet feels within himself for not being able to act. Shakespeare brings Hamlet's anger he feels for Claudius to a climax in the soliloquy when he presents a list of words condemning Claudius: 'b****y, bawdy villain, / Remorseless, treacherous, lecherous, kindless villain!' ...read more.

Again Hamlet questions himself and why he has not avenged hi father's murder since he has the 'cause, and will, and strength, and means / To do't.' The army can fight for nothing worth having, yet Hamlet cannot fight even though he has the reason and the proof in which to do so. Hamlet admires Fortinbras, 'a delicate and tender prince' as he is a brave man of action who will fight 'Even for an egg-shell.' The tone of the soliloquy is similar to when Hamlet compared himself to the player - both the player and Fortinbras can take action for a cause not wholly believable and Hamlet cannot fight for something that is justly and worth fighting for. Fortinbras will fight when honour is at stake even if the cause is minute and Hamlet feels pathetic as he has had 'a father killed, a mother stained' and he cannot stand up for the honour of his own family. Through the course of the soliloquies Shakespeare presents Hamlet's thoughts and feelings to show the development of the character and for Hamlet to discover his own judgement and realise who he himself is. The final soliloquy draws in on all of Hamlet's thoughts and finally it seems by the end that he will take action. However the language continues to contrast action with words and though Hamlet may feel intent the audience are still yet to see whether he will take action or not. The final words of the soliloquy may be seen as a turning point, 'O from this time forth, / My thoughts be b****y, or be nothing worth.' The reason that God has given him will be worth nothing now if he does not act, and the feelings and emotions that Hamlet has gone through will be a waste - he surely will be nothing but a coward if he does not take action. ...read more.