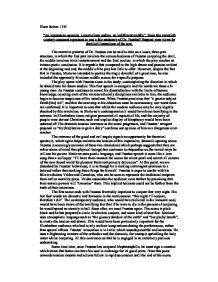 &quot;An impressive opening, a marvellous ending, an indifferent middle&quot;. Does this twentieth century comment represent to you a fair summary of Dr. Faustus? Support your views by detailed illustrations of the text.

Elena Solaro 13M "An impressive opening, a marvellous ending, an indifferent middle". Does this twentieth century comment represent to you a fair summary of Dr. Faustus? Support your views by detailed illustrations of the text. The narrative patterns of Dr. Faustus can be said to take on a loose, three-part structure, in which the first part involves the serious business of Faustus conjuring the devil, the middle involves trivial entertainment and the final section, in which the play reaches an intense poetic conclusion. It is arguable that compared to the high drama and passion evident at the beginning and end, the middle of the play has little to offer. However, despite the fact that in Faustus, Marlowe intended to portray the tragic downfall of a great man, he also included the apparently frivolous middle scenes for a specific purpose. The play opens with Faustus alone in his study, contemplating the direction in which he should take his future studies. This first speech is energetic and his words are those of a young man. As Faustus continues to reveal his dissatisfaction with the limits of human knowledge, rejecting each of the various scholarly disciplines available to him, the audience begin to become suspicious of his intentions. ...read more.

It is important that the audience can still relate to Faustus and fell that he is able to make conscious decisions about his fate, all be they the wrong ones. Whilst we continue to be thus engaged with Faustus, every move he makes in this scene creates high tension and greatly enhances the dramatic quality. About half way through the scene, we witness Mephastophilis providing a desperate Faustus with a dagger to kill himself (suicide being an offence to heaven and an appropriate means of getting to h**l). Although the old man talks him out of it, the audience is still wracked with suspense, particularly whilst witnessing Faustus ponder feverishly as "h**l strives with grace for conquest in [his] breast." However, Faustus soon reverts to his former, cowardly self when Mephastophilis threatens to tear his flesh. He instructs "sweet Mephastophilis" to punish the old man instead, ignoring his conviction that "my faith, vile h**l, shall triumph over thee". Following this episode, Faustus asks for Helen of Troy as his paramour, and speaks to her, where he advised the scholars strictly not to. We feel that Faustus must realise he has made a fatal choice -he knows that the image he sees before him is a spirit- and watch in compelling revulsion as he kisses the devil. ...read more.

As Faustus begins to age, he too appears to become aware of the consequences of his actions. The amusing trick he plays on the horse-courser in scene ten plunges him into a despondant mood, forcing him to reflect upon his fate. He is now using his powers on even lower forms of entertainment than he did by making a mockery of the Pope in scene seven. He realises that he has done nothing special and is yet "but a man", which is enforced by the horse-courser's callous assumption that he is a "horse doctor". In Elizabethan times, such a profession would not have been highly respected, and Faustus is outraged that this is how he is being perceived. In conclusion, I would say that although the main dramatic events of the play occur either at the beginning or at the end, the middle scenes also have value and interest. Whilst Marlowe's main intention for the comic scenes was to provide amusement for the audience and some respite from the tension of the main plot, they also contribute significantly to some of the main themes of the play by comparing Faustus' behaviour to that of his contemporaries, and thus drawing our attention to the gravity of his actions. ...read more.