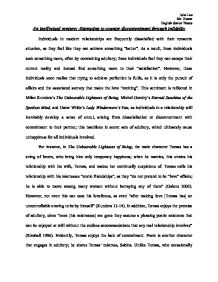 An ineffectual venture: Attempting to counter discontentment through infidelity. This sentiment is reflected in Milan Kunderas The Unbearable Lightness of Being, Michel Gondrys Eternal Sunshine of the Spotless Mind, and Oscar Wilde

An ineffectual venture: Attempting to counter discontentment through infidelity Individuals in modern relationships are frequently dissatisfied with their romantic situation, as they feel like they can achieve something "better". As a result, these individuals seek something more, often by committing adultery; these individuals feel they can escape their current reality and instead find something more to their "satisfaction". However, these individuals soon realize that trying to achieve perfection is futile, as it is only the pursuit of affairs and the associated secrecy that make the love "exciting". This sentiment is reflected in Milan Kundera's The Unbearable Lightness of Being, Michel Gondry's Eternal Sunshine of the Spotless Mind, and Oscar Wilde's Lady Windermere's Fan, as individuals in a relationship will inevitably develop a sense of ennui, arising from dissatisfaction or discontentment with commitment to their partner; this manifests in secret acts of adultery, which ultimately cause unhappiness for all individuals involved. For instance, in The Unbearable Lightness of Being, the main character Tomas has a string of lovers, who bring him only temporary happiness; when he marries, this strains his relationship with his wife, Tereza, and makes her continually suspicious of. ...read more.

and feel trapped because that's what happens" (Eternal Sunshine of the Spotless Mind). The characters use adultery in order to escape the "trapped" feeling they have, not necessarily for love or any particular romantic purpose. Despite knowing that Clementine used to be with Joel, another client of Lacuna Inc., Patrick has no particular remorse for his actions; Patrick merely wishes for his own selfish happiness. Stan, Patrick's colleague, sums up this sentiment: "You looked happy. Happy with a secret" (Ibid). In the end, it was the secrecy that made the characters temporarily satisfied, not the infidelity. As well, it is clear that both Clementine and Joel harbor feelings of boredom as well, since they sought to remove the memories of their relationship. Although the film ends with a relatively "happy ending" for the main characters, both characters acknowledge that they will still, eventually, tire of each other. Whilst eating in a restaurant, Joel wonders: "Are we like couples you see in restaurants? Are we the dining dead?" (Ibid)). His relationship with Clementine is evidently not one that always satisfies Joel's boredom; however, this is arguably the reality for many couples. ...read more.

In Act III, a minor character remarks: "In this world there are only two tragedies. One is not getting what one wants, and the other is getting it" (Wilde). In the end, both Lady and Lord Windermere achieve their desires; this is a tragedy for the audience, who knows the deceit that is still present in their relationship. This play shows that ignorance and secrecy really can bring "happiness" and even suspected infidelity can cause intended fissures in a relationship. In The Unbearable Lightness of Being by Milan Kundera, Eternal Sunshine of the Spotless Mind directed by Michel Gondry, and Lady Windermere's Fan by Oscar Wilde, the characters attempt to escape their unrelenting boredom and dissatisfaction of a commitment to their partner by committing infidelity; however, this does not bring them happiness, and ultimately causes misfortune for all involved. Unfortunately, infidelity and adultery is increasingly prevalent in society as individuals attempt to escape an ennui that will never end by seeking "satisfaction" elsewhere. However, infidelity never has a happy ending, and if the individuals are satisfied it is only a superficial and temporary satisfaction. In this modern day and age, individuals feel they need to strive for something more exciting in their relationships; however, this goal is often unachievable, and the quest for an unattainable happiness is often futile. ...read more.