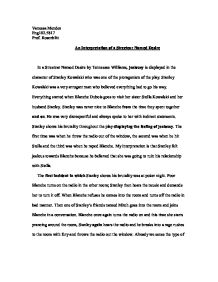 An Interpretation of a Streetcar Named Desire.

Vanessa Mendez Eng102.5817 Prof. Rosenblitt An Interpretation of a Streetcar Named Desire In a Streetcar Named Desire by Tennessee Williams, jealousy is displayed in the character of Stanley Kowalski who was one of the protagonists of the play. Stanley Kowalski was a very arrogant man who believed everything had to go his way. Everything started when Blanche Dubois goes to visit her sister Stella Kowalski and her husband Stanley. Stanley was never nice to Blanche from the time they spent together and on. He was very disrespectful and always spoke to her with indirect statements. Stanley shows his brutality throughout the play displaying the feeling of jealousy. The first time was when he threw the radio out of the window, the second was when he hit Stella and the third was when he raped Blanche. My interpretation is that Stanley felt jealous towards Blanche because he believed that she was going to ruin his relationship with Stella. The first incident in which Stanley shows his brutality was at poker night. ...read more.

There was an incident in which again Stanley broke out in a rage but this time it was Stella's fault. It took place during the dinner she had prepared in celebration for Blanche's birthday. Stanley was shoveling the food in his mouth like a beast and Stella says "Mr. Kowalski is too busy making a pig of himself to think anything else!" (1725). There she embarrassed him and called him a pig. The second time she tell him "Your face and finger are disgustingly greasy. Go and wash up and help clear the table" (1725). Here not only she called him disgusting but she gave him an order, something she might have never done if they were together alone. There are no justifications for man to hit women and less of all if she is expecting a baby. There many other ways to get rid of a person who you think may interfere with your life, but surely not the way he did. Stanley didn't know how to handle the situation without the use of violence. ...read more.

He knew no one would believe poor Blanche, which everyone would think she just jealous of their love, which in a way she was, but still she wasn't in her right state of mind. Stanley of course saw this as a great opportunity to send Blanche away. Although Stella's passion for Stanley was so powerful at the end she realized that it was true, he was an animal, and he took advantage of the whole situation. He thought he was so macho, and the he can get away with doing these atrocities .Stella had a lot of fault too because she should have known her sister wasn't well, and she should have helped her. She should have never allowed him to treat her sister that, because he acted like an animal in every way. In a way I can compare Stanley with the character of Iago from the Shakespearean play "Othello". Both of them had an inner anger. Iago caused Othello to kill his wife Desdemona, and Stanley caused Blanche to loose her mind completely, and all cause of jealousy. ...read more.