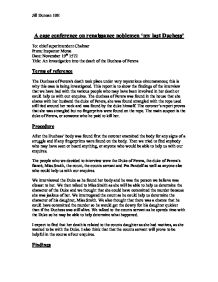 An investigation into the death of the Duchess of Ferera

A case conference on renaissance noblemen 'my last Duchess' To: chief superintendent Chalmer From: Inspector Morse Date: November 19th 1572 Title: An investigation into the death of the Duchess of Ferera Terms of reference The Duchess of Ferera's death took place under very mysterious circumstances; this is why this case is being investigated. This report is to show the findings of the interview that we have had with the various people who may have been involved in her death or could help us with our enquires. The duchess of Ferera was found in the house that she shares with her husband the duke of Ferera, she was found strangled with the rope used still tied around her neck and was found by the duke himself. The coroner's report proves that she was strangled but no fingerprints were found on the rope. The main suspect is the duke of Ferera, or someone who he paid to kill her. Procedure After the Duchess' body was found first the coroner examined the body for any signs of a struggle and if any fingerprints were found on the body. ...read more.

We thought this was suspicious at the time and when we asked him if he had seen or heard anything he said that he had not. He also said that he had was in the house at the time but was upstairs at the time so he did not hear anything but this seemed suspicious as he could not have been that far away at the time of her death and if someone else came in the house they would have known that he could have walked in at any time. We then interviewed anyone who may have been walking past the crime scene or anyone that may have seen or heard anything nobody came forward to give any more information than we already knew. We then interrogated Miss Smith, she said that the Duke 'was a very kind man who would not and could not hurt anyone.' She denied that she was in the vicinity of the crime scene at the time of her death although she did not have an alibi for the time of her death. ...read more.

Duchess of Ferera but we can be sure that she was murdered as there were marks around her neck from the rope and the rope was still there when she was 'found' by the duke. She could not have committed suicide as the coroner confirmed that the death was by strangulation and she would not have physically been able to do this herself. The duke was implicated in her murder because he had the motives, because he wanted to remarry and he may not have been able to get a divorce. He would have had the opportunity to commit the murder as he was in the house at the time, also there was no forced entry to suggest that someone broke into the house and murdered her. It also did not make sense for someone to enter the house and murder her when he was in the building but all this evidence is circumstantial meaning that we cannot prove that the Duke of Ferera committed the murder unless anyone else comes forward. Therefore we cannot arrest him. ?? ?? ?? ?? Jill Duncan 10E ...read more.